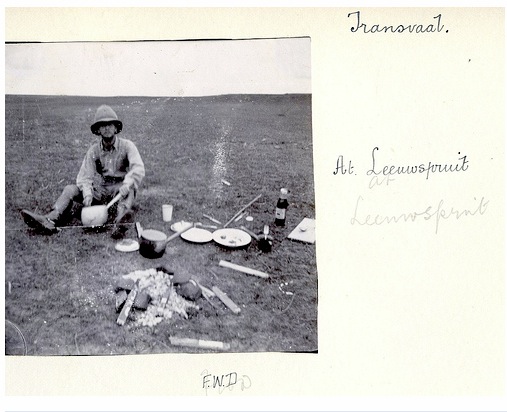 HiLoBooks is pleased to serialize Morley Roberts’s 1900 novel The Fugitives, an adventure set against the backdrop of the Second Boer War (1899–1902). The author was once known for his novel The Private Life of Henry Maitland (1912), but he quickly passed into obscurity. How obscure? In a 1966 story about plagiarism (“The Longest Science-Fiction Story Ever Told”), Arthur C. Clarke attributed an 1898 sci-fi story of Roberts’s (“The Anticipator”) about the same topic to H.G. Wells; in a 1967 guest editorial in If (“Herbert George Morley Roberts Wells, Esq.”), a contrite Clarke noted that not a single Morley fan had emerged to point out this error. HiLoBooks — in conjunction with the Save the Adventure book club, which under the editorship of HILOBROW’s Joshua Glenn is issuing The Fugitives as an e-book — is rectifying this situation. Enjoy!

While all the world, and not only England, hung upon the lips of the war-correspondent in South Africa, and cursed the erratic conduct of the censor, Mrs. Middleton would have denied in her heart that the Commander-in-Chief, then on the Modder, had a more difficult task than was hers at Cowley. It was not in her nature to let things drift and see how they would come out: they had to be managed. Now, just as Clare had begun to throw out delicate hints that she would be glad of sufficient pressure to make her alter what it would have pleased no discerning person to call her mind, the absurd and ineligible Blake had got out of prison and become a new kind of hero with new claims upon her faith. And it was all due to the meddling of Gwen, who was equally idiotic in her selection of ideals. The situation was peculiarly maddening to a woman of any management or of turn for it, and Sybil Middleton was so accustomed co getting her way that it hit her especially hard.

She replied at once to the formidable Mrs. Doughty, and having, in a long letter, denounced with vigor the conduct of Gwendoline toward the innocent and confiding one, she requested her correspondent to be especially alert in seizing and impounding all and sundry of the letters or telegrams which might arrive in future.

But if she was smart, Gwen, though so much younger, was equally alive to the situation, and had at once seen that her sacred letters were in danger.

“If I don’t do something I shall get no more of them,” she said, “and if Gordon wants me to do anything I shan’t be able to do it.”

Her next conclusion was that no one had any right to interfere. She was twenty-one and had money of her own. It dawned on her with something like a shock that there was nothing whatever but precedent and consideration for the feelings of the County to prevent her leaving home and setting up for herself. Nevertheless such a step was difficult to take. Why it was hard she did not know, for as regards her father her mind was fairly free. He might look on her with some affection, and assuredly he did, but nevertheless she was only a “domestic detail,” and certainly not so much to him as Tip the terrier. To flout her stepmother would not have cost her a pang. Nevertheless there was the County, and the County represented all that great body of tradition which the boldest and youngest girl finds it hard to stand against. It would be as easy for an East End beauty to wear feathers condemned by the whole street in which she lived, as for Gwen to disdain utterly its polity as represented by certain dowagers who were individually objects of her contempt and derision. But, above all, to leave Cowley would be to leave Clare in the hands of the enemy. Gwen’s pride was by now involved in the defeat of her stepmother and Jim Carruthers. She felt that she was trustee for Blake.

“Very well, then, I’ll stay,” she said, with some relief at not having the County up in arms.

But she went out early one morning and took the fast train up to town, in order to see Millicent Doughty. As she travelled she made her plans. To go to the house was to invite trouble, and perhaps a battle-royal with Mrs. Doughty, who would have been no mean antagonist for any coalheaver, or even a clergyman.

“I’ll see Sophy and send her round to Millicent,” she said, and when she got to Paddington she drove to another friend of hers who lived in Westbourne Terrace, and found her on the very doorstep.

“Oh, thank heaven, you darling,” cried Gwen, “what luck I’ve found you. Are you going anywhere in particular?”

Sophia Carew denied that she wanted to do anything whatever but hug her for an hour, and so Gwen paid for her cab and went inside. But she paused on the step and called the man back.

Then she went in, and the two girls kissed each other affectionately.

“I want you to do something, Sophy. Will you?”

“Then go round and fetch Millicent while I stay here. I haven’t long to waste, as they don’t know I came up to town.”

“But why didn’t you go to her? Have you quarrelled?”

“Bless your heart, no,” said Gwen, “quarrel with Milly! I’d as soon quarrel with you. But I’m not friends with her mother, and I must see Milly at once.”

“She is a hateful old thing,” said Sophy; “she’s the most trying, rampant thing in London. But I thought you had come to see me.”

Sophy pricked up her ears.

“All about it? All about what?”

Gwen murmured something rather inarticulate, and Sophy ran to her.

Gwen kissed her.
“So I did and I will. Oh, go, you duck, and fetch Milly, or there will be trouble.”

“About It?” asked Sophy.

And with a final hug they separated, and Sophy went on her errand about “It” and “Him.”

In half an hour she came back with the “innocent and confiding” child of Mrs. Doughty, who was a hard, clear, keen, gymnastic young lady with curly black hair and eyes like a bright bird’s. She ran in on Gwen and shook her.

“Oh, you’ve given me a time, you horrid dear, so you have, and my ironclad mother has been slating you at every meal since the trouble began,” she cried. “But now I’ve got you, you’ve to tell me ——”

“Tell us,” agreed Millicent; “tell us all about it.”

“I’m afraid I’m not good enough to know you, though,” said Gwen. “Do you know, dear, your mother says I’m a contaminating influence? That was her last letter. The first said I was scandalous. But, oh, Sophy, do you know what she said about Millicent here?”

Sophy shook her head and was evidently rather jealous.

“She said she was an ‘innocent and confiding child’!”

Millicent burst into a ringing peal of laughter, and Sophy joined in the chorus.

“What have I ever done to have such things said of me?” asked Millicent.

And then she sobered and frowned.

“Why, ever since I was as little — so little I couldn’t confide in her — she wouldn’t let me.”

There was almost a touch of pathos in her voice.

“I think mothers should pass an examination before they are allowed to have control of their daughters,” said Sophy Carew, “and if I had my way I’d make my mother Examiner-in-Chief with unlimited power.”

“Ah, she’s a dear,” said Gwen regretfully. “I think my mother would have been like her.”

“Oh, much worse, tighter in fact,” said Millicent; “so I don’t care. But here, Gwen, you aren’t telling us!”

“So now they’re somewhere running away,” said Gwen, with a catch in her throat, “and I mayn’t hear for a long time, and Clarry is just as ill as ill. And I know your mother will sneak all the letters now, Milly, and I want to know how to stop her. I wish I’d got him to send them to Sophy instead.”

“Now, do you think I’m an unkind, weak, little fool?” she demanded.

“Then you’ll get your letters,” said Millicent.

“I’ll tell you,” said Millicent. “Since the ruction over that telegram I’ve not had a letter at the house.”

“Has she taken them?” shrieked Gwen indignantly.

“No,” said Millicent, “not much. I’m friends now with all the postmen, and I don’t care if I am. They said it was as much as their places were worth not to deliver the letters where they were addressed, so now my postage is very heavy, dears, I can tell you.”

“What do you mean?” asked the other girls.

“I mean I have to pay five shillings each for them,” said Millicent, “and I’ve written to every one to say they mustn’t write; for I’m ruined by it, Gwen, quite ruined, and haven’t a penny or a pair of gloves to bless myself with.”

“So you have, and you can if you like,” cried Millicent; “for I do think paying five shillings for an invitation to go to tea with someone whom I hate, and so on, is very trying. But at any rate you’ll get your letters, Gwen.”

Gwen rose and kissed her.

And she showed such sudden distress that her two friends were alarmed.

“Suppose there should be a telegram, a cable!”

“What, am I to bribe all the telegraph boys too! I really never thought of it. What shall we do?” asked Millicent.

Though she asked the question, she was the first to answer it and to find the solution.

“Oh, you stupids, of course the post-office people will change the address if we ask them. I never thought of it. Look, we’ll go round to our post-office now. And they’ll do it for the letters as well.”

Gwen was ready to jump at any solution of the threatened trouble, but, as she prepared to go, another worry arose in her mind.

“But what address? I can’t have it sent to Cowley!”

Sophy Carew came to the rescue.

“You can have it sent to me, of course. My mother won’t ask questions, I know.”

And when they inquired at the post-office whether a cable coming from Africa and addressed to Middleton, care of Miss Doughty, 100 Portman Square, could be readdressed, they found that there was no official objection to such a course being adopted.

Gwen sighed, and all the girls beamed so on the young man behind the counter that he felt warm in spite of the February weather.

For the Free State was at last being invaded.

And as the news was of course a little late there had been other fighting further to the north. If, indeed, sound could carry so far across the silent plains of the high veldt, perhaps her sister’s lover was even now listening to the roar of guns upon the Modder.

See All Posts by Morley Roberts

Morley Roberts (1857–1942) was an English novelist perhaps best remembered for The Private Life of Henry Maitland (1912). He also write science fiction (e.g., "The Anticipator"), and adventure. HiLoBooks is serializing his 1900 adventure novel The Fugitives, which will also be published as an e-book by the Save the Adventure adventure book club.