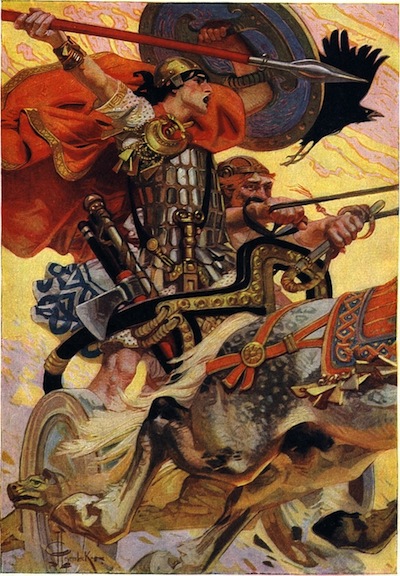 The 1926 satirical sf novel King Goshawk and the Birds, by Irish playwright and novelist Eimar O’Duffy, is set in a future world devastated by progress. When King Goshawk, the supreme ruler among a caste of “king capitalists,” buys up all the wildflowers and songbirds, an aghast Dublin philosopher travels via the astral plane to Tír na nÓg. First the mythical Irish hero Cúchulainn, then his son Cuanduine, travel to Earth in order to combat the king capitalists. Thirty-five years before the hero of Robert Heinlein’s Stranger in a Strange Land, these well-meaning aliens discover that cultural forms and norms are the most effective barrier to social or economic revolution.

HILOBROW is pleased to serialize King Goshawk and the Birds, which has long been out of print, in its entirety. A new installment will appear each week.

ALL INSTALLMENTS SO FAR
***
BOOK I: A Corner in Melody

Chapter 7: How Cúchulainn treated a Minion of King Goshawk

After such adventures the Philosopher dared not let Cúchulainn give him the slip again. On the next day, therefore, they went linked arm-in-arm throughout the whole of their explorations; by which, as they were both far and wide, and as the slowest pace to which Cúchulainn could restrict himself was nearly twice as fast as the Philosopher could tolerate, he was so much exhausted that on the third day he readily agreed that the hero should go forth alone, but laid on him this geasa: that for no cause whatsoever, and under no provocation whatsoever, should he strike or otherwise mishandle any human being, or any property of any human being whatsoever.

Thus bound, Cúchulainn walked rapidly through the city till he came to the open country about Lucan. Presently he met with a man in the scarlet uniform of King Goshawk, bearing on one arm a wicker cage, and under the other a strange-looking apparatus somewhat resembling a set of war-pipes, the bag of which he squeezed with his elbow forcing from the nozzle a stream of violet-coloured gas wherewith he sprayed the hedges and the trees that lined the road. Under the discharge of this noxious vapour there fell at his feet great numbers of asphyxiated birds, from which he selected the robins, thrushes, and blackbirds to put in his cage, and then walked on, whistling a merry note, trampling through the fallen wrens, finches, sparrows, and other such common truck as if they had been drifted leaves in autumn.

“Fellow,” said Cúchulainn, “what are you doing?”

The bird-catcher cocked an impertinent eye, and, tapping the breast of his tunic, said: “See my livery? Then hold your lip.”

Cúchulainn, mindful of his geasa, put constraint upon his wrath. Then, laying a hand upon the bird-catcher’s shoulder, he said: “Friend, I have asked you a civil question: I want a civil answer,” fixing him with a look so persuasive that the bird-catcher made haste to propitiate him, saying: “No offence, boss. I’m gathering birds for King Goshawk.”

“They’re his birds, boss. The robins, thrushes, and blackbirds, that is. I take no others, as you see.”

“How are they his?” asked Cúchulainn.

“Is that any reason why you should gather them for him?” asked Cúchulainn.

“I do what I’m paid for,” said the bird-catcher.

“Vile slave,” said Cúchulainn, “why do you not do what you will to do, and get paid for that?”

“Now, God help you, sir, for a poor innocent,” said the bird-catcher. “Wouldn’t we all do that if we could? But we can’t. Personally I’d like to carve wooden toys for children — I carve ’em for my own kids in my spare time: cows and donkeys and crocodiles and things, you know, all done with a penknife — amatoorish, of course, but the kids like ’em. But bless you, how could my penknife compete with the Toy Trust? — I mean if it came to business. And if I went into one of the Trust’s factories, I’d just have to stand seven hours a day feeding lumps of beech wood into a damned machine. No thank you. Not for me. The open road for this child. Now just stand aside, sir, if you please, for this job is piece-work.”

“O thou pitiable slave,” said Cúchulainn. “Give me that cage and gas-battery: for, by my hand of valour, you shall spray no more.”

At this speech the bird-catcher began to feel some alarm, for to his ears it seemed to smack of lunacy: so he set to coaxing and reasoning with Cúchulainn, saying: “Easy, boss, easy. Where’s your Majesty’s oil-field?” for it was a common infirmity of the mind in those days to imagine oneself possessed of boundless wealth, and Cúchulainn spoke with the haughtiness characteristic of one so afflicted.

“A truce to this jesting, slave,” said Cúchulainn, his anger kindling. “Give me that cage and gas-battery, or must I take them by force?”

“Please, your Majesty,” said the bird-catcher, “I am but a poor man, and these are the property of his Majesty King Goshawk, whose subject I am. Will your Majesty deign to walk down the road some fifteen perches, and at the third turning to the left you will find your Majesty’s oil-field.”

Still mindful of his geasa, Cúchulainn enforced himself to a meek behaviour, taking the bird-catcher very gently around the neck with one hand, while with the other he caught the wrist that held the cage. The bird-catcher tried to struggle but Cúchulainn mildly repressed him, and having quietly relieved him of cage and gas-battery, laid him tenderly on his back upon the road. If you will believe me, the neck and wrist of the thrall took not more than a week or so to regain their normal flexibility: yet for this moderation Cúchulainn got small thanks from the Philosopher, who laid sterner geasa than ever upon him, declaring that if he had thought the songbirds could be saved by such simple methods, he would not have gone beyond the skies for a liberator.

See All Posts by Eimar O'Duffy