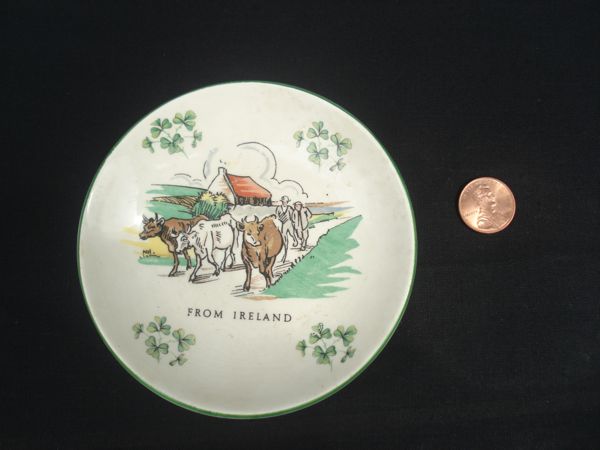 As my husband and I were driving back to New York after my mother’s funeral, I spotted a general store on the Rhode Island-Connecticut border, the kind that exist solely for those who forgot to bring something back from Newport or Block Island or Martha’s Vineyard or wherever. Judging from the weathered sign and the rusting trinkets out front, it seemed decades old, and yet I swear I had never seen it in all my travels along this stretch of I-95. Strange.

My husband looked puzzled as I pulled into the gravel driveway. “I have to go in.” He started to open his door but I stopped him. “And I have to go alone.” I was not in the store two minutes when I saw the plate. Let me explain.

After my mother became ill, I traveled to India in search of the secrets of eternal life. While my studies proved inadequate to save her, I learned a bit about yogic chanting, namely that the sweetest chants are the ones sung to Krishna — the mischievous youth who liked butter, enjoyed hanging out with female cowherds, and who just happened to be the human incarnation of the great god Vishnu, tasked with no less a chore than the preservation of the entire universe.

When I returned to the States with my newfound knowledge, my mother said she appreciated it, but I think she was humoring me. She was Irish Catholic and didn’t see the sense in taking off to India when the Holy Spirit was everywhere.

When I saw this plate, I knew there was something about it that was both Indian and Irish, something that transcended the religions that divide nations and men. I bought it immediately and would later discover that much like St. Patrick who had driven the snakes from Ireland, Krishna had tamed the serpent Kaliya who had previously been poisoning the waters of the Yamuna river, killing the cowherds on its banks. Coincidence? Maybe. Maybe not.

This plate is about cowherds, about shamrocks, about Ireland, yes, but it is also about liberation, about preservation, about eternal life. And if you purchase it, my only wish is that you do not eat corned beef from it, without first thinking of Krishna.

See All Posts by Sarah Rainone

Sarah Rainone is author of Love Will Tear Us Apart (Crown/2009), and indie book developer and ghostwriter.