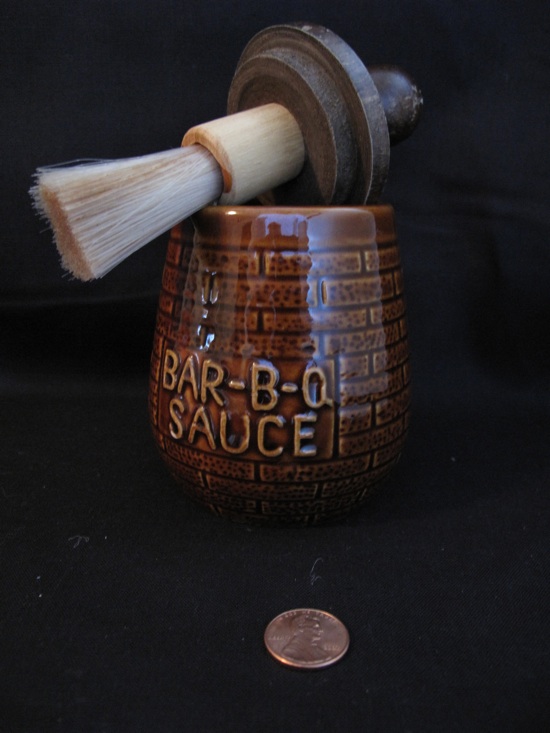 Originally surrounded by red velvet drapes, the booth is now open and unlit. On the wall is a photo of Nesbit from her Gibson Girl days and beneath it, on a small shelf, is a little jar labeled “BAR-B-Q Sauce.” The jar was originally purchased by Nesbit as a gift for White — whenever White would meet her for dinner, he would order ribs, and she paid the waiters to always keep the small jar full of sauce at the table for White’s special use. Very special, according to suppressed trial testimony after his murder — allegedly, the ribs weren’t the only things White covered in barbecue sauce behind those drapes.

After White’s death, Booth 106 was roped off as a sign of mourning, a RESERVED sign was placed on the table, and per Evelyn Nesbit’s wishes, once a week the bartender would refill the BAR-B-Q jar, as if in preparation for White’s eventual return. The table went empty for almost two years (not even Nesbit sat at it), until the afternoon of January 5, 1908, when Harry Thaw sailed into the Naughty Pine, plunked himself down at Booth 106, ripped up the RESERVED sign, tore down the red velvet curtains, draped them around his body like a winding sheet, and demanded a shave. When told that he was in a bar and not a barber shop, Thaw cried, “Then I’ll do it myself,” whereupon he pulled out a straight razor, stropped it on his leather belt, and taking the BAR-B-Q jar, proceeded to slop sauce all over his face as if it were shaving cream. Then, pretending to stare into a mirror, he gave himself a blood-soaked shave while humming “I Could Love A Million Girls,” the song that had been playing when he shot White in the face.

“You must be a lunatic,” said one of the waiters. Thaw just smiled at him. His first trial for the murder of Stanford White had ended in a deadlocked jury; but the next day, when his second trial began, he pleaded not guilty by reason of insanity.

This contest-winning story — which triumphed over 600+ entrants — was also published at Slate.

Matthew J. Wells, a playwright based in New York, triumphed over 600+ entrants in a Significant Objects fiction contest hosted by Slate.com. His plays have been performed at the Magic Theatre in San Francisco and the Ensemble Studio Theatre in New York, and he can be found online here.