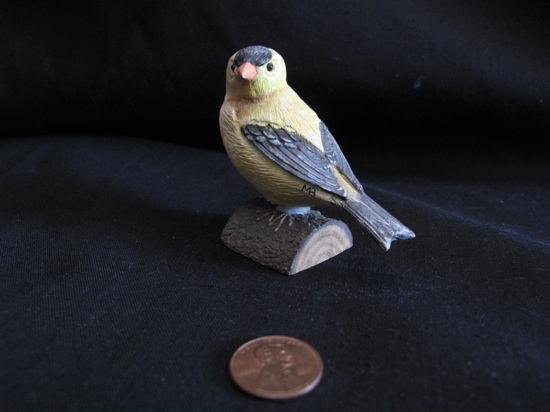 Last summer, my wife and I held a barbeque in our back yard. After the event, I saw a little yellow bird with a black crown and wings on the knickknack shelf above the toilet in the bathroom. I’d never seen this figurine before. The bird, its head turned ninety degrees to the left of its body, gazed at me squarely with unblinking black eyes.

When I asked my wife about where she got the figurine, she had no idea what I was talking about. The figurine suddenly took on the cold heft of an object that existed only to tell us how much it didn’t belong here.

If neither of us had placed it on the shelf, that meant someone from the party had done it. Maybe it was a joke. Or was it a snide criticism of our decorating skills? I found myself getting angry, but then another thought occurred to me: perhaps it was a psychological issue that one of our friends was suffering from, a sort of a reverse-kleptomaniacal syndrome. In which case my anger was misplaced and insensitive. While I was mulling the possibilities, my wife was completing a more practical, forensic study of the bird. She pointed at the tiny lettering near the bottom, near its tail: MB.

In the kitchen, we went through the guest list and found two matches, a man and a woman who shared the same initials. I’d been friends with the female MB since college, and my wife had known the male MB since early childhood, but they’d never been introduced. Neither seemed to be the type to pull a stunt like this, but we emailed them each a photo of the figurine and asked if they knew anything about it.

Within a minute, we received replies. It was an American goldfinch, they agreed; and neither of them had placed it in our bathroom. The enthusiasm of this identification was evident in both emails; both were avid birders, it turned out. They announced their engagement soon after.

When the newly minted couple visited our house a month before the wedding, they stopped by the bathroom to admire the bird that had brought them together. I decided that the perfect way to celebrate their love was to give the bird to them. I found a fancy hexagonal wooden box in the closet and when the evening drew to a close, presented them with the gift.

They looked at the box with absolute shock. In tears, they chided me for taking the bird out of its natural habitat and for putting it in a container that resembled a coffin. Before I had a chance to apologize, they stormed off, and as my wife and I stared at the bird in the box, I had to admit, it did look sort of dead.

Sung J. Woo’s short stories and essays have appeared in The New York Times, McSweeney’s, and KoreAm Journal. His debut novel, Everything Asian, was published in 2009.