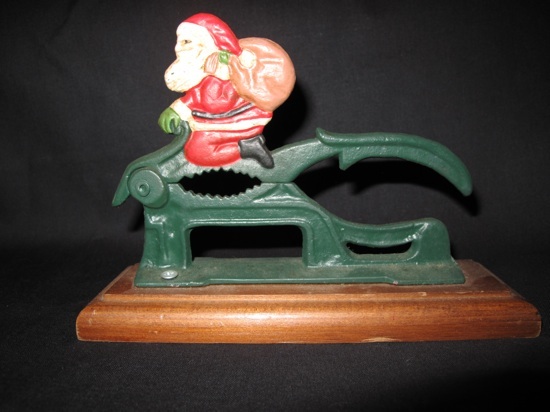 Although I live now in Indianapolis, I grew up in Gas City, which is a town (not a city) about an hour and a half northeast. During the summers after 7th and 8th grades, through a program run by the Grant County FFA (Future Farmers of America), I worked as the “hired hand” on a quarter section (160 acres) down between Jonesboro and Fairmount owned by a couple in their 70s named Mr. & Mrs. Winslow. Every weekend Mrs. Winslow (Ortense) baked a pecan pie, and so every Friday afternoon she’d have me crack and shell about a pound of pecans (Priester’s). And I’d use this Santa Claus nutcracker to do it.

On one really hot Friday the first summer I worked there the two of us were on their porch, me cracking the pecans and she sitting in her metal chair, and she was looking at me odd, kind of smiling but kind of sad, too. She sometimes said weird things, which I chalked up to her age (like about her “time in Hollywood”), but since she was staring with that funny look and not saying anything I asked her if something was wrong. She said, “Oh, no, dear. It’s just that seeing you, there in the afternoon light, in your t-shirt with your hair damp and pushed back, you suddenly looked to me just like Jimmy when he was your age. And gosh, he did love that nutcracker.”

I didn’t have any idea who Jimmy was, since her husband was Marcus Sr. and their son was Marcus Jr. But when I said “Excuse me, who?” she turned sort of weird, like I was making fun of her. “You’ve never ever seen Jimmy on TV?” she said. I told her we were Pentecostal, and didn’t watch television, so she explained to me that Jimmy Dean was her nephew who she’d raised from the time he was nine years old, before he got famous. “Oh,” I said “Jimmy Dean. That’s interesting, Mr. Winslow. Do you get free sausage?” I assumed her nephew was the founder of the Jimmy Dean Sausage Company. She laughed and laughed, but then the phone rang and we didn’t talk any more about him.

That night I asked my mom if she knew who the Winslows’ nephew was, and she explained that “Jimmy” was James Dean, who’d grown up on the Winslows’ farm in the 1940s and graduated from Fairmount High and then became a movie star. She said she’d never seen one of his movies.

A year later, Mr. Winslow died. And on my last Friday working at the farm, which must have been August of 1976, at the end of a long day, we were drinking lemonade, as usual, but this time Mrs. Winslow was putting vodka in hers. We were out on the porch again, me cracking pecans, and we’d just heard a train pass by and blow its whistle, and suddenly she asked if I wanted to take the Santa Claus cracker to keep, as a keepsake, since with Marcus Sr. gone she’d decided she’d stop baking pies. I didn’t really want it, but to be polite I said sure, and thanked her. Then in a big gulp she finished her third glass, and sort of giggled. “But don’t you ever do what I once caught Jimmy doing, OK?” When I asked what that was, she giggled again and said she couldn’t say, but I chuckled too and kind of insisted, so she told me. One afternoon in the spring of 1945, when Jimmy was 14, she’d heard on the radio that the Nazis had surrendered, so she ran into Jimmy’s room to tell him, and found him sitting on his bed with his pants off and his penis stuck in the nutcracker.

She smiled and shook her head. I didn’t reply, and at that point she seemed to realize it was, as my kids would say, “TMI,” and stood up and took the pitcher of lemonade and her glass and the vodka bottle inside.

But I did take her nutcracker home, and have kept it ever since. Until recently, the only other person I ever told about what they call its “provenance” was my wife – my ex-wife now – and I didn’t want to reveal it publicly until our kids were grown, since I thought it would embarrass them (or worse) when they were little. Plus, Mrs. Winslow has long since passed on. So when my girlfriend, who’s a Realtor, told me she’d seen on Antiques Roadshow that a jacket of James Dean’s was worth $1000, I told her about the nutcracker. And now she’s convinced me to sell it. She says I owe it to history and, in a financial sense, to myself. (I called the guy who runs the James Dean Gallery, up north of Fairmount, at Exit 59 off Interstate 69, to find out how much it might be worth, but he pretty much hung up on me.)

Although I haven’t cracked a nut with it since that afternoon in 1976, I have no reason to believe it doesn’t still work fine.

See All Posts by Kurt Andersen

Kurt Andersen is the author of the novels True Believers, Heyday, and Turn of the Century, and has written for film, television, and stage. He is the host and co-creator of the Peabody Award winning Studio 360, a weekly radio show about arts and culture.