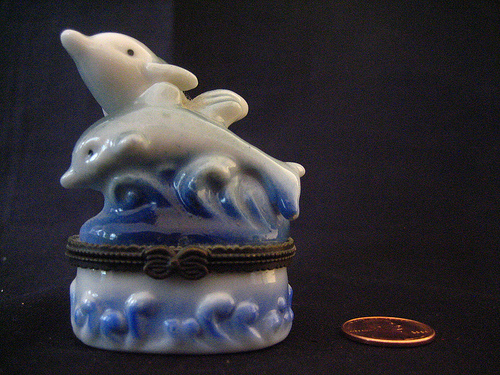 I reach into my jacket pocket, rolling the dolphins around in my hand, the way I used to when I was little. My fingers remember every curve and dip of their ceramic swirls. I had this same jacket on the day I left for college, stuck the dolphins in the same pocket on impulse before leaving for good. The dolphins were my secret friends. I’d tell them things I could never tell anyone else. The big one could jump higher, but the small one was the prettiest.

Miguel is making a drawing from the photo I’ve brought. “I have the real dolphins, if you want to see them,” I offer. He nods, not looking up, intent on capturing some line. I pull them out and swoop them in a little spiral before setting them on the table. The motion comes back to me so easily: one of the dolphins’ moves for the circus contest, a favorite game of mine. I’d make them perform acrobatic leaps and spins, swing on invisible trapezes, walk an imaginary tightrope. At the end of the game, I’d announce that the dolphins had won first place. The bow was really their prize ribbon.

Miguel finishes the sketch and picks up the dolphins, turning them over slowly. He smiles. “I think we’re good,” he says. “You ready?”

“Ready,” I say, and he sets the dolphins down. I decide it’s a good sign that he’s so gentle. I take my skirt off and flash back to the last time someone else touched them. Evan, the morning after he spent the night in my dorm room. I remember how I looked over at him, still naked, and thought You’re really here. Then the dolphins fell out of his hand onto the rug, their lid flipping open. I hated to see their insides exposed like that. They didn’t seem like a thing to put something else into. The dolphins were already whole. “I thought maybe you kept your stash in there,” Evan laughed. Then he asked me to keep what had just happened on the down-low since he was trying to get back together with his ex-girlfriend.

I lie down on the table. Miguel holds his drawing up for me to see. “Which side?”

“Here,” I say, patting my left hip, pushing my underwear down so there’s room.

He turns up the music, transfers the drawing onto my skin, and gets to work. It hurts, especially when the big one’s nose goes over my hip bone. But it’s okay. Now, no matter what happens, the dolphins will be part of me.

See All Posts by Jenny Hayes