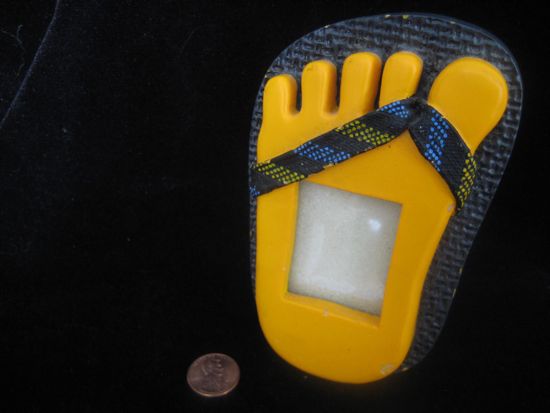 Any image that has been carefully placed in an antique gold frame embossed with angels and laurel wreaths becomes transformed into something elevated and celestial. “All you need to know about this old person/building/animal/plate of food/scenic vista/bleeding martyr is that it is sacred to me and holds a very special place in my heart,” the frame seems to tell us.

But what if you are the kind of person who wishes to remember the bad times? You believe there is wisdom in being surrounded by cautionary tales—reminders of your most fatal blunders. How else to remind yourself to never again respond too quickly to a seemingly harmless social invitation and risk becoming mired in an evening so vile it undermines your sense of self-worth? So you bring home a memento of that detestable event: a whimsical cocktail stirrer or a personalized matchbook. But where do you put these wretched things? Or the snapshot you still have of that person you dated who stole your credit card and talked with a phony English accent? Let’s not forget that former best friend of yours who calls to brag about the good things that happen to him by disguising them as disappointments, tragedies and inconveniences. “I’m so depressed,” he says, “That deal I closed has moved me into a much higher tax bracket.” Then he leaves you with a faux-ironic autographed photo of him standing in between Spencer and Heidi. You need a place to put that unpleasant souvenir of friendship gone sour. One that will admonish you never to take his phone calls again. Ditto the business card left behind by the tech guy who came to fix one broken USB port, disassembled your entire Internet connection, refused all blame, and insisted on getting his full fee.

Well, some people put these things at the center of dartboards. But that has become a cliché. And why run the risk of attracting unwanted dart games? No, when you want to demean an image, hold it up to spite and ridicule and single it out as something worthy of scorn, you want a frame that conjures a rage like the one that overwhelmed that Iraqi journalist who threw his shoes at George Bush. You want a frame that says “I step on you with my bare dirty feet.”

This poorly articulated caricature of a foot wearing a flimsy multicolored flip-flop sits atop a frame that boldly declares, “Whatever I have enshrined here is something I hold in contempt. He/she/it is sub-par in every way: cheap, shallow, unimaginative, disposable, as void of any real value as the very worst, most despicable gift catalog. And just like the frame itself, they too are under the false impression that they are adorable and a welcome addition wherever they go.” May they eat every meal for the rest of their lives from a plastic plate festooned with Santa’s adorable helpers, listening to a never-ending loop of the opening line of “Up, Up and Away,” by the 5th Dimension.

See All Posts by Merrill Markoe