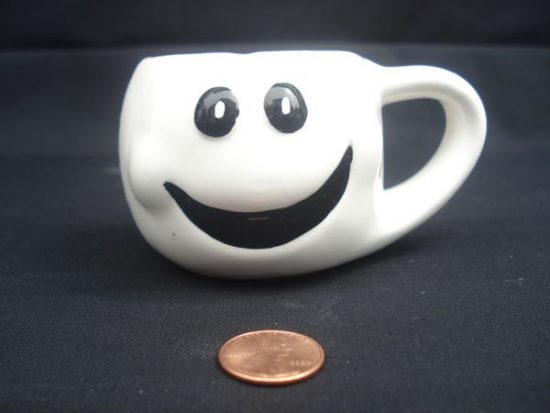 This object is best known from its appearance in the 1939 film No News From the Navy, a comedy starring James Wilton as a hapless midshipman who cannot set aside his seafaring ways, even when he is confined to dry land as a result of an injury. Wilton’s character (who is called, simply, “Sailor”) competes for the affection of a young woman named Evelyn (Mary Hannan) despite the opposition of her father (Gordon Howard) and a larger, determined suitor (Kenneth Lopp). The film is a second-tier comedy, but there is one classic scene in which Sailor shaves before taking Evelyn out on a date. He is clearly accustomed to shaving aboard his ship, and as a result, he is constantly attempting to regain his balance, despite the fact the floor is level and stable. The critic Leonard Folsom has written that “The unheralded Wilton has a scene that combines the physical complexity of a Chaplin solo with close-ups of inexpressive expression that rival the finest moments of Keaton.” At the beginning of that scene, Wilton uses this smiling mug as his shaving mug, and while he sets it on the shelf above the washbasin midway through, it remains, as Folsom writes, “an oddly compelling focus of the film so long as it is onscreen, enormous in its diminutive size, menacing in its cheer.”

There are other shaving mugs that resemble this one, but none was created as this one was: by hand, with the assistance of a kiln, by a famous surrealist sculptor. This one was. In fact, it was wheel-thrown and fired by the Belgian artist Paul Coppens in 1932; Coppens, of course, was part of the group of artists supported by the patronage of Edward James. “I have dreamed of a smiling shaving mug,” Coppens wrote to James in June 1932. “A sketch is attached. It looks like a face, of course, because a face is the only thing that is capable of smiling (or is it?), but it also looks like a tooth, because a tooth is the only thing that is capable of showing when a face is smiling. In addition, I have noticed that daily washing rituals, including shaving, are illogically equated with the whiteness of teeth. But there is more to the image. Look at the handle. It functions like an ear visually, but as there is only one, this figure is incapable of ‘smiling ear-to-ear,’ as the idiom has it. In addition, I have recently learned that ‘mug’ is a slang term for the human face in some parts of the English-speaking world. (Ironically, this practice comes from the fact that beer steins were fashioned in the human image, and unattractive specimens of our race were said be ‘mug-faces.’)” Coppens’ piece, which he called Tooth Fils (the wordplay refers both to dentistry and to its small size), was part of the International Surrealist Exhibition in 1936.

How Tooth Fils came to be in No News From the Navy is simpler than the creation of either work. James Wilton, who himself trained as a painter and considered himself an acolyte of, if not a participant in, Surrealism, attended the exhibit, acquired it, and insisted that it be in every one of his films. As there was only one film, this is a condition that history has found easy to satisfy.

See All Posts by Ben Greenman

Ben Greenman is the author of several books of fiction and nonfiction, some best-selling, including The Slippage, Please Step Back, Don Quixotic, and (with Questlove) Creative Quest and the new Mixtape Potluck.