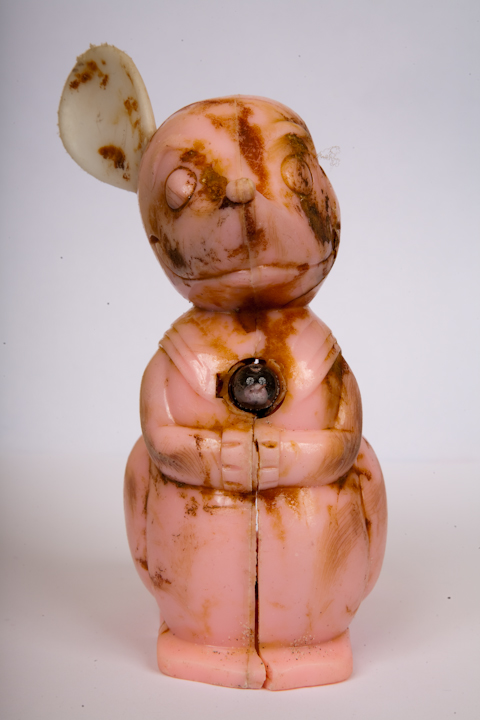 My brother and I could not agree on how to worship the mouse. It was typical of us back then that we could agree that it should be worshipped — that was obvious from the day it arrived in the mail, a gift from our father, who had been in Vietnam for three years, which was one-third of George’s life and one-half of mine, on business more important than his wife and his sons. The last gift had been a green and yellow straw mat, and we agreed that it was, in fact, a prayer mat, the use of which only became clear with the advent of the mouse. The evening it arrived we knelt in our room in our pajamas in the dark. George had his flashlight out and he shined it on the mouse’s face.

“Great Faaa,” he said. “Mighty Faaa, hear our prayers.” He said the name in a singsong, high-pitched voice. We had just seen The Day of the Dolphin the week before. I put my hand on the flashlight and pushed it down, so the little monkey in the mouse’s heart was more plainly illuminated.

“What are you doing?” George asked, and our argument began. We quarreled subtly, at first — we still shared the mouse, but prayed differently to it — and then more obviously, stealing Him back and forth, and performing secret worship in the closet or the basement or the pool shed. The violence, when it came, attracted our mother’s attention. “If you can’t share that hideous piece of trash, I’m going to throw it away,” she said, and that night we prayed peacefully, imploring Faaa and Mr. Peepers not to hurt her, but by the morning we were fighting again. “Faaa!” George said to me, sitting on my chest and pummeling my head with the sides of his fists, and I could almost understand how his whole argument could be contained in just the name. I wanted to tell him that there was a monkey in my heart, and a monkey in his heart, and a monkey in everybody’s heart, and there was nothing worse in the world than an unappeased, unworshipped monkey who lived in you and was mad at you. But all I could say was, “Mr. Peepers!”

“Why can’t you two just be good?” our mother asked, and she took up Peepers-Faaa in her hand and threw Him against the wall, breaking off His ear. I cried, but George screamed at her, telling something horrible was going to happen to us because of what she had done, and horrible things did happen to us. She took up the body and flushed it down the toilet, and George said later that it was a miracle of Faaa that it flushed, but that it made sense that He would exercise His magic to get away from our mother, and from me.

I still have the ear.

See All Posts by Chris Adrian