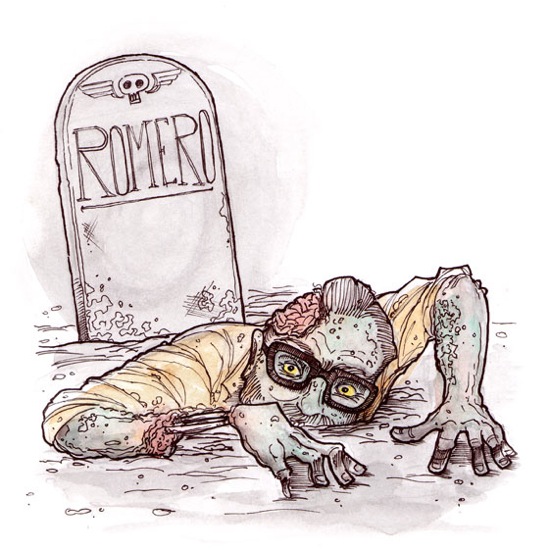 GEORGE A. ROMERO’s (born 1940) movies are charming, because they aren’t ashamed to send the same counterintuitive message, again and again. Before Romero, “zombie” was strictly a voodoo term; in horror movies, zombies were slaves — the embodiment of a disenfranchised people. Beginning with the unimpeachable Night of the Living Dead (1968), which was released at a pivotal moment in the cultural consciousness, not to mention at the height of the Civil Rights Movement, Romero updated the zombie, flipped the concept on its head: mainstream white Americans were shambling, brainless beings. NOTLD’s African-American protagonist, Ben (Duane Jones), ends up being shot by an angry white mob that mistakes him for a zombie. Romero’s subsequent films, with their brain-hungry antagonists, have offered a similarly heavy-handed running commentary on the status quo, indicting everything from American consumerism to the military establishment. But while Romero’s social engagement through genre fiction is hardly unique (see Karel Čapek), his gory panache is all his own.