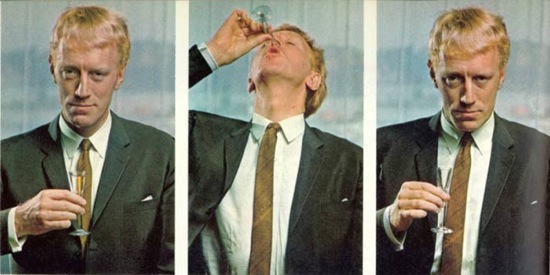 Which version of MAX VON SYDOW (Carl Adolf von Sydow, born 1929) do you see when you close your eyes? Is it the von Sydow who played chess with Death, or the one who gave psychiatric advice to young Indiana Jones? Perhaps it’s the planetary ecologist of Dune, or a less-than-menacing Bond villain, or an even-less-menacing-still Ming the Merciless? Is it Jesus Christ? Is it just von Sydow’s disembodied voice you hear, speaking from the wilds of Skyrim in his signature tones both gravely and rich… or do you see only his mute face as he passes notes to a child who lost his father on 9/11? This polyglot actor has taken on projects in Swedish, Norwegian, English, Italian, German, Danish, French, and Spanish. Von Sydow’s father was a professor of Irish, Scandinavian, and comparative folklore, and his Baroness mother filled her days with teaching, too; but it’s fair to say that the most important educator in his life was Swedish director Ingmar Bergman, with whom he started working in 1955. Von Sydow made the jump to the silver screen, and chose many projects that have become iconic. Sometimes, his films were controversial; sometimes, they were mediocre. But always, always, visions of him burn brightly in our minds, long after we leave the darkened theater.

On his or her birthday, HiLobrow irregularly pays tribute to one of our high-, low-, no-, or hilobrow heroes. Also born this date: Brian Setzer.