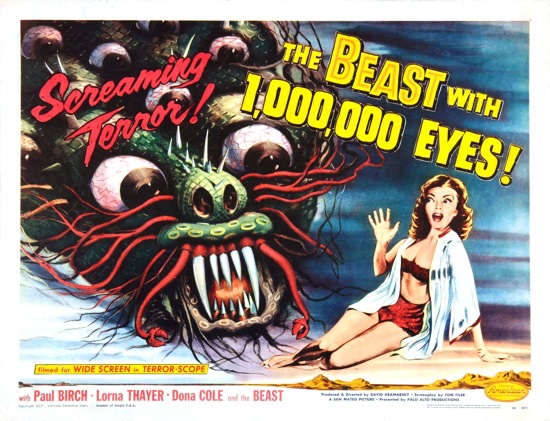 Under the leadership of SAMUEL Z. ARKOFF (1918-2001), co-founder of American International Pictures (in 1954), AIP became the leading purveyor of exploitation films. With and without AIP’s James H. Nicholson (and Roger Corman), Arkoff — a heavy-set man fond of cigars, and thus the avatar of schlock-producers — nimbly exploited trends and catered to the tastes of horny, crass, bloodthirsty Americans. Inventor of the teen film market, he unapologetically produced 463 lowbrow movies, including such classics as Beach Blanket Bingo, Wild in the Streets, I Was a Teenage Werewolf, The Beast with a Million Eyes, and Blacula. He gave many directors and actors their start; and he fostered the growth of the blaxploitation genre by producing films (often starring Pam Grier, who started her career as an AIP receptionist) aimed at inner-city theaters. Though AIP’s Edgar Allan Poe films were critically well-received, Arkoff wasn’t interested in respectability; he was all about the money. (The Double Feature release pattern, which enabled distributors to take a percentage of box office receipts instead of settling for a flat fee from exhibitors, was his idea.) As Arkoff put it in his 1992 autobiography, Flying Through Hollywood by the Seat of My Pants, “Though shalt not put too much money into any one picture. And with the money you do spend, put it on the screen; don’t waste it on the egos of actors or on nonsense that might appeal to some highbrow critics.”

On his or her birthday, HiLobrow irregularly pays tribute to one of our high-, low-, no-, or hilobrow heroes. Also born this date: Kira Roessler, Djuna Barnes, Weegee, Egon Schiele.