Pinakothek (8): The Appeal to Reason 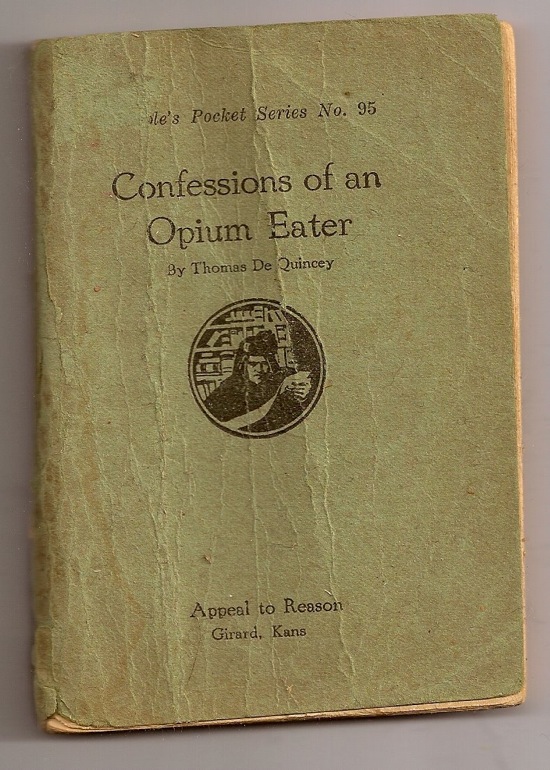 What caused me to pick this item out of the trash heap was not its title — there are better editions of DeQuincey’s book out there (if none so pocket-sized) — but its publisher. Appeal to Reason was America’s leading Socialist weekly between its founding in 1897 and its demise in 1922. Yes, its offices were in Kansas. At its height it had a circulation of 760,000. Its contributors included Jack London, Mother Jones, Upton Sinclair, Joe Hill, Helen Keller, and Eugene Debs. Its editor commissioned Sinclair to write The Jungle. At the same time, its offices were regularly broken into and its editors subject to smear campaigns and arrests on trumped-up charges. Its founding editor committed suicide under the strain. His son, who inherited the paper, diluted its radical spirit considerably — he caved in to the government and endorsed the nation’s entry into World War I, for example. The Red Scare eventually put the paper out of its misery. 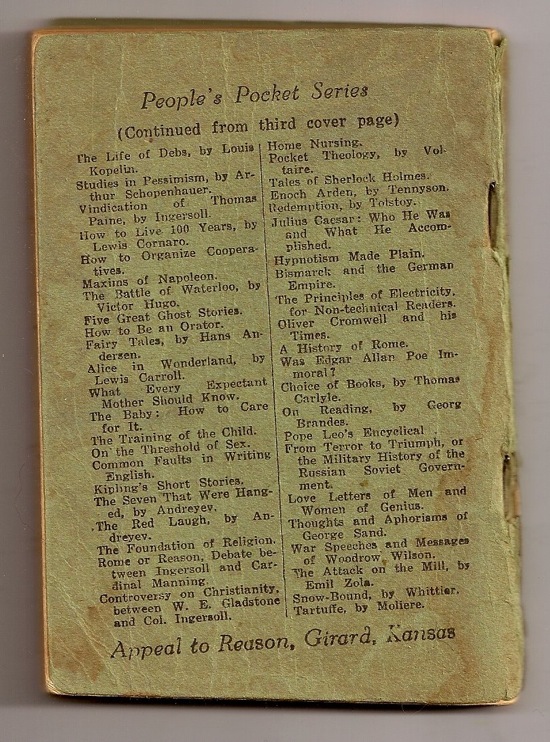 One of the Appeal to Reason’s most striking sidelines was its People’s Pocket Series, a series of 3 1/2″ x 5″ paperbacks that sold for 25 cents apiece — five for a dollar. The back and inside covers of this one list 131 different titles (you can tell it dates from near the end, since the list includes both Adult Education in Russia by Mme. Lenine [sic] and War Speeches and Messages of Woodrow Wilson). The series included books on evolution and birth control, on hypnotism and home nursing; Marx, Shakespeare, Oscar Wilde, Balzac, Thomas Paine, Boccaccio, Tolstoy, Whitman, Lincoln, Kropotkin, Zola. It was large-spirited enough to contain titles by both Clarence Darrow and William Jennings Bryan, both Robert Ingersoll and Pope Leo XIII. A banker brought in as an investor during the paper’s last years continued the series after its demise, as Haldeman-Julius’s Little Blue Books. These were massively influential, to judge by how often they are invoked in the early chapters of at least two generations of autobiographies.

We all know what happened to Socialism, unfortunately. What I’d like to know is: What happened to continuing self-education? These books were read by teamsters and machinists and stevedores and farmhands and miners. They read them not because they thought the books could help them get a better job but because they were curious. They were hungry — they wanted to consume the world. This isn’t to say that every hod-carrier in Michigan in 1910 was reading them, but enough were to make the series continually expand. And none of it was fluff, or merely mercenary, or simple-minded propaganda. How many people — with considerably longer formal educations and a larger fund of leisure time — read anything like that sort of thing today, for fun? How many people assume without thinking about it that reading is and has always been a pursuit strictly for the privileged? Would it be too much to consider a connection between the rightward shift in politics and the decline of self-motivated learning?

Originally published at Luc Sante’s blog, Pinakothek. HiLobrow.com has curated a collection of our favorite Pinakothek installments. This is the eighth in a series of ten.