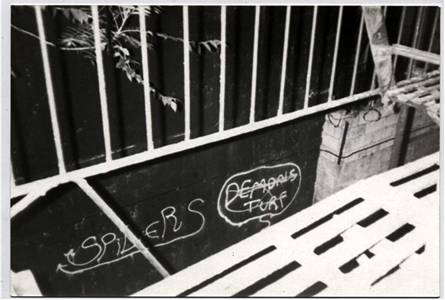 This was the view out my back window in New York City for more than ten years. That time (1979-1990) was the heyday of Wild Style, when graffiti truly became an artform, as is documented most vividly in Henry Chalfant’s photographs. These tags, though, are primal. You can imagine them — in chalk — festooning an alley a century ago, or even earlier. Gang tags probably go back to antiquity. Today, owing to a couple of decades of outsized police response to graffiti, much urban tagging, accomplished under great pressure, is even cruder than this primal sort.

Wild Style graffiti is a late, studied, self-conscious phenomenon, a sterling example of postmodernism in action. This sort of zero-degree tagging, by contrast, seldom if ever even gestures in the direction of art (although photographs by Helen Levitt, Cartier-Bresson, and John Guttmann show examples of it that qualify as poetry). Both are unauthorized sets of marks made by urban youth, generally, on surfaces that do not belong to them. Graffiti of both sorts aims to broadcast and publicize the existence and identity of the tagger.

You might say that graffiti is, at base, a form of advertising. In the places where graffiti is found there is frequently also advertising of the authorized sort. Space rented from the owner of the surface in question is given over to printed tags that publicize goods and services for sale. You might say that the one form of advertising is intransitive — no action is required on the part of the beholder other than perhaps to steer clear if one is of a rival crew — while the other is transitive: it intends to prompt expenditure.

So the form of graffiti that inveigles the passerby into surrendering cash is viewed as legitimate by society, while the kind that is strictly gratuitous, or nearly so, is considered vandalism. The financial aspect has further ramifications, of course: the first sort pays rent while the second squats. But squatters never displace other tenants; they merely occupy otherwise vacant spaces. Likewise, graffiti roosts on unemployed surfaces. And as ugly as it sometimes is, it’s indisputably human, which cannot be said about the post-industrial walls and sidings it occupies.

Yes, this is an argument I’ve been carrying in my pocket for thirty years. The passage of time may have made it less pressing, but hardly obsolete, I think.

Originally published at Luc Sante’s blog, Pinakothek. HiLobrow.com has curated a collection of our favorite Pinakothek installments. This is the seventh in a series of ten.