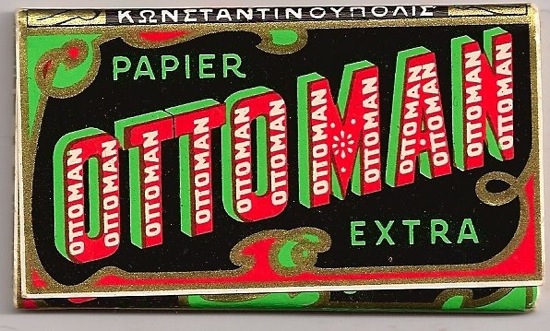 ASIDE FROM BRANDY and cigars, no product on the market is packaged quite as traditionally as cigarette papers. Nearly every item on your grocer’s shelf gets an image update every few years to make sure it passes the nowness scan the shopper’s eye performs as it scrolls down the aisle. The rolling-paper package, however, like its fellows, presumably appeals to aged gentlemen who consume those items at their club while leafing through bound volumes of Punch, and remain faithful to the brands favored by their grandfathers; they care that their brand won the gold medal at Saragossa in 1908. Okay, but really — haven’t those old gentlemen already gone to the glue factory, and aren’t rolling papers mostly consumed by stoners, backpackers, squatters, Deadheads? I guess we can assume that a polite fiction is at play, the manufacturers of cigarette papers pretending that their product isn’t really employed as accessory to what some people might consider a crime. Meanwhile, potheads can spend hours in happy contemplation of the complex patterns and inscrutable imagery on the packages.

I had never seen the Ottoman package until I spotted it recently at a Turkish import store in Berlin; it became an instant favorite. More than any other design I can think of at the moment, it succeeds in activating the wayback machine: looking simultaneously venerable and startlingly new, it manages to replicate permanently the effect that its modernism must have had a century ago, its modern-style curlicues blending in with Victoriana to a degree, but in their asymmetry preparing the eye for the shouting Broadwayism of the logo. More than any other brand, Ottoman has suffered no updating of any sort. Its boast of excellence, within, is printed in four languages: Arabic, French, Greek, and what appears to be Amharic. The only change is that, although “Constantinople” is printed in Roman and Greek characters along the edge and “Stamboul” appears in the inside flap, the papers are now made in Italy. 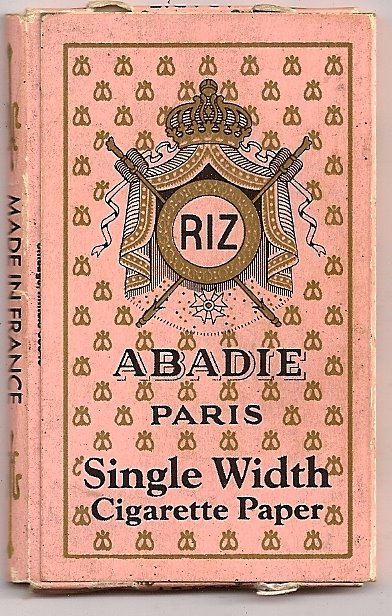 Abadies, with their imperial arms and fly device, were so much the most elegant of the brands that I, for one, manfully struggled with them for years even though their adhesiveness left something to be desired. Like the famous Zouave on the Zig-Zag package, the trappings of the Abadie pack seem to hark back to the reign of Napoleon III. Today, as shown, the import version is marred by a textual addition in a drastically ill-judged typeface and size. Most American vipers had no idea what that central word meant; as a result it became a kind of stoner invocation: “Riz, man…” 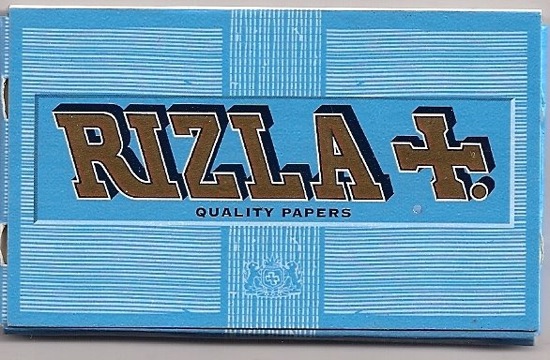 Riz La Croix, on the other hand, just became “Rizlas” in America. If you tried to buy them in France, though, you’d have to respect the quasi-rebus and ask for “ree lah crwah.” The ravages of globalism are demonstrated in this pack, made for sale in France: the gap between the “z” and the “l,” formerly distinct in the European version, has been closed up. The packaging has been updated in other ways, too. Those fine white lines, not unpleasant although they nearly obscure the escutcheon, weren’t there before. On the back, the phrase “Rolling Since 1796” appears, in English, a nod to the international confraternity of hacky-sack players. 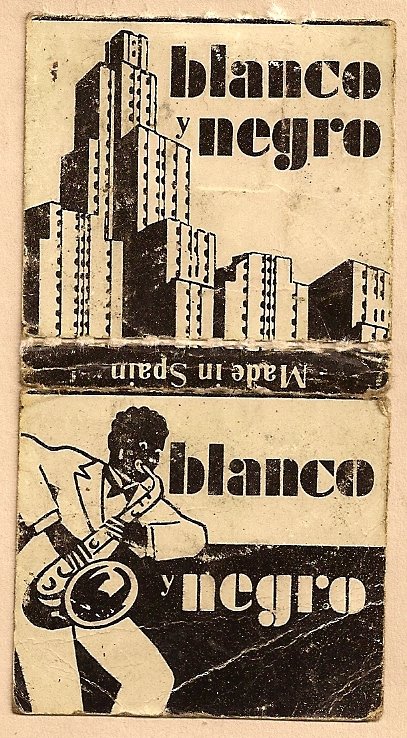 Finally, from the archives come the Spanish-made Blanco y Negros, a package from circa 1980 that may or may not have changed since, although I would suspect some more racially sensitive adaptation must have taken place. These fall into a different category, since they proclaim not long and immovable tradition but modernity, circa 1923. They perhaps meant to encourage subsistence farmers in Extremadura to imagine themselves reveling in the sensual delights of Harlem skyscraper speakeasies every time they rolled up a gasper. They didn’t change for at least sixty years for the same reason that innocent but eager Euros perpetuated the misconceived idea of Dixieland jazz well within living memory, in thrall to a confusion of exotica and modernismo as firmly rooted in the European mythosphere as Karl May’s idea of the American West. As with all these papers, whatever was being smoked in them, the packaging itself sold the consumer a viper’s dream of otherness and elsewhere. — Luc Sante

Originally published at Luc Sante’s blog, Pinakothek. HiLobrow.com has curated a collection of our favorite Pinakothek installments. This is the third in a series of ten.