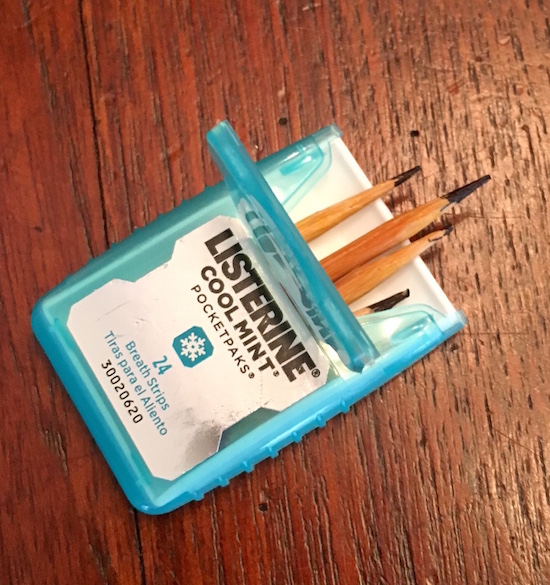 “Art is faith-based, in that it requires you to believe in it to make it work,” said the artist and critic David Robbins. I am having something like a crisis of faith in art these days. I am not quite ready to say I don’t believe in art, but I am definitely asking questions about it I never asked before.

I was about to start cooking dinner one night when I found that my 8-year-old daughter had made “pencils” out of the bamboo skewers I had bought to make our meal. She had cut them down with scissors, colored them with marker, and then placed them in a cast-off case.

With kabobs off the table, I took her out for Chinese food. Before we left home for the restaurant she asked me if I had the “pencils.” I said “yes.”

The restaurant had paper tablecloths. We ordered food and then asked the waitress for a ballpoint pen to play hangman.

Our food came and my kid put the pen down. She asked to see her “pencils” and I fished them out of my bag. She placed them in front of her plate and studied them as she chewed.

I have always been attracted to the art world because I thought it was the only real place a person could be free. But that’s not correct, I see now. As Robbins observed, it’s only a place to freely make art.

What would I make if I didn’t automatically assume I had to make art, which in my case has meant to make writing that is art-like? What would I do if I were already free, not just free within that realm?

We finished eating and I paid with my card. My daughter asked to sign the charge slip. I watched her write a word on it that was neither her name nor my name.

I put the “pencils” back in my purse. I carry them around in part to remind me that I can make whatever I want.

See All Posts by Amy Fusselman

Amy Fusselman's lyric essay, Idiophone, will be published by Coffee House Press in 2018.