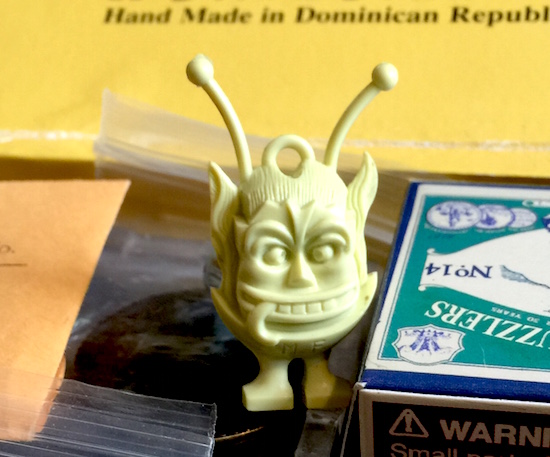 As a little kid in the 1960s with limited access to television, my role models were my friends’ big brothers. My friends certainly weren’t role models — they were dweebs like me. And grown ups — they might as well have been a different species, with a way of thinking that made them impossible to relate to. Big brothers were still kids, but infinitely more sophisticated and wiser than 6-years-olds like me (who big brothers regarded with indifference at best and as sticky-fingered pests at all other times).

I have a talisman that I can use to summon big brother mojo. It’s a Martian Fink ring — a little armless vinyl creature with pointed ears, antennae, square feet, and a long tongue curling from its leering mouth. It’s attached to a plastic ring so I can wear it on my finger (I don’t).

The Martian Fink is a knock-off of the much more popular Rat Fink character created by custom car builder Ed “Big Daddy” Roth. It was manufactured as a gumball machine novelty in 1965 by the Henal Novelty and Premium Co. Anyone with five cents could buy one, but I didn’t know that at the time. I was too dense or shy to ask my friend’s big brother, who had one in 1967, where he got his. As a big brother, he simply had access to cool stuff that I could only dream about.

I bought mine on eBay 15 years ago, and keep it in a box in my bed table drawer. I try not to look at it too much, because I don’t want the magic to run out.

See All Posts by Mark Frauenfelder

Mark Frauenfelder is a research director at Institute for the Future, the founding editor-in-chief of MAKE magazine, the co-founder of Boing Boing, and the editor-in-chief of Cool-Tools.org. He was an editor at Wired from 1993-1998, the founding editor of Wired.com, and is the author of eight books, including Maker Dad: Lunch Box Guitars, Anti-Gravity Jars and 22 Other Incredibly Cool Father-Daughter DIY Projects.