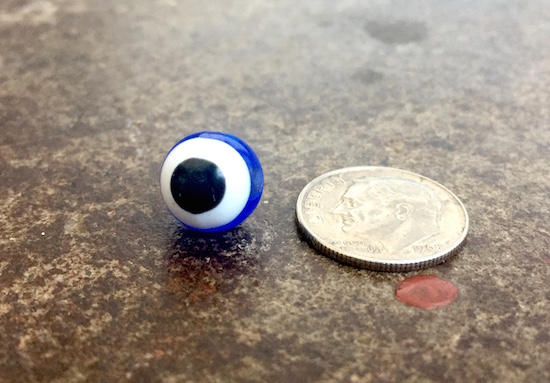 If you buy a piece of jewelry in Greece, you may later discover a strange blue and black bead in the box, nestled against your gold bracelet or necklace. You should not return the bead or throw it away. This miniscule glass orb is for you, and your life may depend on it.

The Evil Eye, that ancient curse delivered via menacing glare, is intended to bring harm or even death to another human being. A special edition of this curse, the Evil Eye of Envy, goes beyond general bad vibes and acts as a kind of cosmic comeuppance. Any good fortune publicly displayed in the form of a new house, healthy children, or diamond earrings makes a prime target for Envy, who is always on standby to ruin the year of one of Fortuna’s favorites.

The Greeks have long believed that the best protection against the potent Evil Eye of Envy is its own image. Personal amulets intended to be apotropaic — able to turn away evil — often bore elaborate scenes of threatening animals like ferocious lions and pointy-beaked cranes attacking a giant eye. Over the years, this iconography was streamlined and reduced to the simple image of the Eye itself, always in blue. (In the Mediterranean region, the rare blue-eyed person may be an unwitting carrier of Evil Eye powers.)

My own Evil Eye bead sits in the coin section of my wallet and monitors the daily cycles of my personal wheel of fortune, where dollar bills come in and out, credit cards approach their limits, and taxi receipts accumulate in direct proportion to delusions of grandeur. About a third the size of a marble, the Eye is at once present and discreet. I received it from a superstitious friend around the time my son was born, and I’ve carried it with me ever since, as a form of free, otherworldly insurance.

If I downsize my gear for a weekend afternoon and transfer some essentials to a smaller coin purse, the Eye comes along, too. I cannot prove it’s functioning, but even on tough days, when I glimpse its bright blue flash or touch its smooth surface while digging for an elusive dime, I think, “Who knows how bad it could have gotten without the Eye?”

See All Posts by Molly Heintz

Molly Heintz chairs the Department of Design Research, Writing & Criticism at the School of Visual Arts. She is a co-founder of the editorial consultancy Superscript and has served as the firm’s managing director since 2012. She serves as a contributing editor at Fast Company and The Architect’s Newspaper.