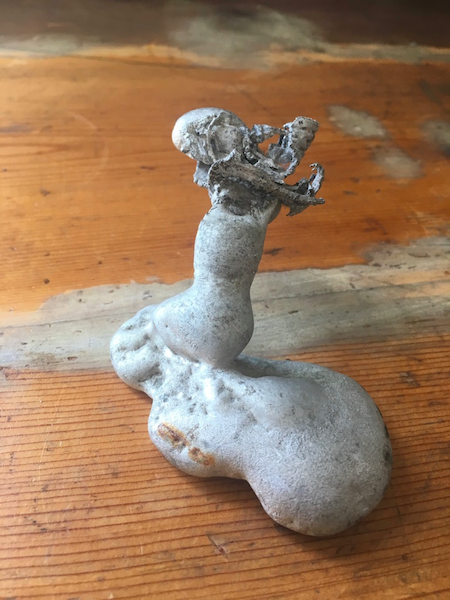 It was October and still hot. I had just turned 19. Two friends and I had driven from the east coast to the west before our transmission blew crossing into California from the north. We hopped a bus to Oakland, where at least we had a place to stay. A beautiful place: my godmother’s home in the hills overlooking the San Francisco Bay. We lazed over coffee that first morning, enjoying the view, puzzled by a strange orange tint to the sunlight. The air smelled of smoke. My godmother called the fire department. They told her not to worry. Just in case, she tossed me the car keys and asked me to pull the car from the garage. By the time I reached the street I could see flames covering the next hillside over. By the time we drove off, smoke blocked the road in both directions. Everything was burning.

The memory feels like a dream: we ditched the car and ran down the hillside, fire licking the tree trunks all around us. We made it to a clear stretch of road and caught a ride sitting on the trunk of someone else’s car. He wanted to drive faster and kicked us off halfway down. No matter, we made it somehow to Telegraph Avenue. Everyone was standing in the street, gawking up at the burning hills, the weird orange ball of the sun staring back down through the smoke. Someone tried to sell me acid. The fire killed 25 people that day.

I went back with my godmother when the city at last let residents through the roadblocks to inspect what was left of their homes. Only her chimney was standing. The books that had lined the living room walls had been transformed into an undulant sea of white ash. I could make out individual bindings and the deckled edges of pages that had once borne words as clear as these ones. When I reached to touch them, they collapsed into powder. The car, reduced to skeletal essentials, was hundreds of feet from where we had left it. The gas tank must have blown. The neighbor’s Jaguar was gone too, in its place a few small puddles of chrome that had liquefied and dripped off the bumper and grill, then pooled and congealed on the ground. My godmother pocketed a lump of it, and so did I, a reminder of a truth too lunatic to squeeze into words. Hers sits on the mantel in her new house on the far side of the Bay. Mine has traveled across the country with me several times since. It’s on my desk while I type this, no longer as shiny as it was then, but still pleasing to the eye and to the touch, smooth and jagged all at once, a liquid in solid form.

See All Posts by Ben Ehrenreich

Ben Ehrenreich is the author of The Way to the Spring: Life and Death in Palestine, and of two novels, Ether and The Suitors.