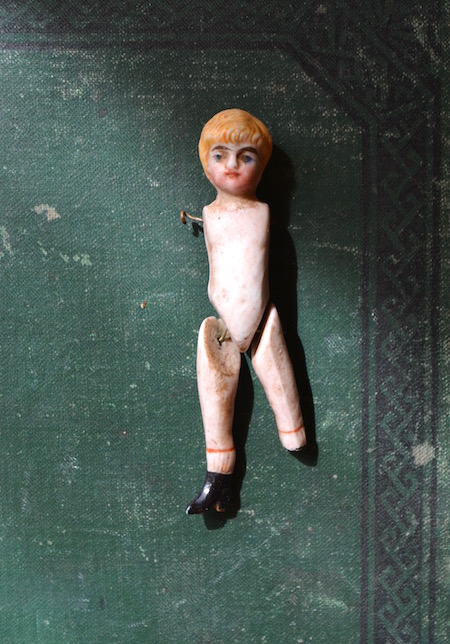 It was one of those long weekend afternoons we spent at my grandparents’ house in the Orinda hills. I had already read all the books. I went looking for something to steal. In a cardboard box on the top shelf in the garage, I found it.

Here she is. That look of rational reproach. Those dust-darkened, disdainful eyes. She is tiny. The word “dainty,” into which in those days I poured all my scorn for the conspicuously feminine, nonetheless applies. She is dainty, but militant. I think of Victorian posture exercises, of girls strapped to a backboard, for hours. Her slim bare body has that unnatural erectness. She has no arms to interrupt its lines. I don’t know where they went. I think I must have thrown their broken pieces away, thrown away even the memory of them, to conceal it from myself. But somewhere I still have the bottom part of her left leg. I once thought I might glue it back on. Then, I’m not sure why, did not. Perhaps because she now seems whole to me. Her amputations only concentrate her. She is all message, one admonishing finger. And in fact she is exactly as long as my baby finger, the only body part I ever broke. Too much importance need not be attached to that. But like that finger she is weak. Why then do I call her Impunity Jane? I blame a book. In the story of that name by Rumer Godden, a rebellious pocket doll scraped through bold adventures essentially unharmed. I had rather fancied myself another Impunity Jane, but when I found my grandmother’s doll, I transferred this fantasy to her. She was the right size, the right vintage, had the look, already described, of a crusader. Let me establish that I knew perfectly well that she was made of porcelain. But I believed my will was strong enough to shape the world around the stories I told myself. If I called her Impunity Jane, then she would be Impunity Jane.

I put this to the test by tossing her high in the air, over and over. I did not even move off the asphalt driveway to softer ground. It was test and proof of faith, to take no precautions. Nonetheless I did my best to catch her. I threw her higher and higher. I remember her cool light shifting weight in my hand, and how I wanted to throw her as hard as I could, but was held back a little by doubt, and reproached myself for that doubt. I see again her limb-loose flight against black pine, blue sky.

What I remember about breaking her is that I would not stop. I kept on tossing her up, again and again. She fell again, and broke again, three times before my faith did.

What she means to me now is ambiguous. Her knowing look reminds me that I am smaller than the world, that it can break me. She is, I am, a Quixote who has learned the limits of her dreams. But like Quixote she reminds me of their power.

See All Posts by Shelley Jackson

Shelley Jackson is the author of the story collection The Melancholy of Anatomy, the novel Half Life, hypertexts including Patchwork Girl and several children's books, most recently Mimi’s Dada Catifesto. Her stories and essays have appeared in many journals including McSweeney’s, Conjunctions, The Paris Review, and Cabinet Magazine. In 2003 she launched her project SKIN, a story published in tattoos on 2095 volunteers. The recipient of a Howard Foundation grant, a Pushcart Prize, and a James Tiptree Jr Award, she lives and works in New York.