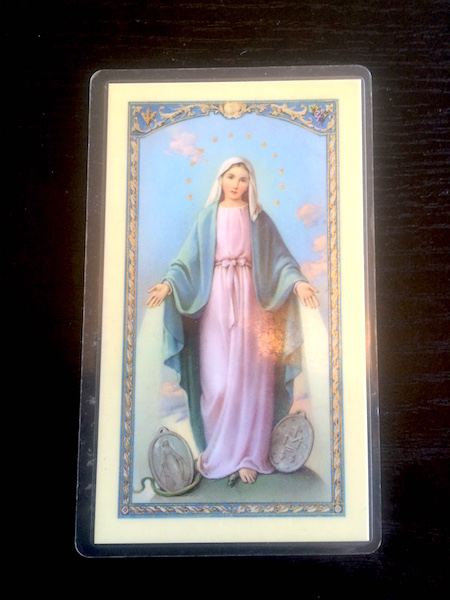 Remember, O Most Gracious Virgin Mary, that never was it known that anyone who fled to thy protection, implored thy help, or sought thy intercession, was left unaided.

I’m not sure when my grandfather gave me the prayer card, only that it feels like it has always been in my wallet, tucked lengthwise among the soft and crinkled dollar bills, the coupons I think I’ll use but never will. The “holy card,” to employ the preferred Catholic term — you can get them bearing an image of Jesus Christ, Mary, and almost any saint — is slightly smaller than my outstretched hand, and is laminated in hard, clear plastic.

On the front of mine is the Virgin Mary: beams of light emanate from her upturned palms, and her bare feet crush a serpent, an obvious Christian symbol. On the back is printed a prayer, known as “the Memorare,” that my grandfather, a devout Catholic from the time he was a child, recited as a terrified 17-, 18,- 19 year old boy on a naval battleship in the South Pacific. He whispered it to himself, again and again, as kamikaze planes swan-dived into the ship. He believed this is why he lived.

Inspired by this confidence, I fly unto thee; O Virgin of virgins, my mother; to thee I come, before thee I stand, sinful and sorrowful.

My grandfather, who I called “Grandpa Chuck,” often said the prayer for me in his gruff but oddly jovial voice — a voice so gravelly it sounded like rocks being pulverized under truck tires — when I was a young girl. I learned the words by rote. (This is also how he taught me Edgar Allen Poe’s “The Raven.”) It would be years before I understood it; I just liked its mysterious, minor-key pleading.

My guess is he slipped me the card in my early 20s, when I was very ill, and he and my grandmother drove me to the Mayo Clinic. I remember saying the prayer as I lay claustrophobic in an MRI machine, iodine wending its way through my veins, and those unholy clicking and clanging sounds blaring in my ears.

Later, when I was well again, I’d recite it to myself during a morning walk home in last night’s clothes, or when this or that substance caused my heart to beat like that of a small animal in fear. When I think about it now, part of me is certain my grandfather would have been horrified by this bastardization of his prayer, but I also think he’d have understood. Sinful and sorrowful. I’d listened.

O Mother of the Word Incarnate, despise not my petitions, but in thy mercy hear and answer me. Amen.

He passed away in October 2013, after a long battle with COPD that rendered his lungs almost useless, his fingers and toes numb. I read a prayer at his funeral, but not that prayer, the right one, and I regret it. Why hadn’t I thought of it? The pale yellow card with its elegant gold filigree has accompanied me across the country, through many years and homes and wallets. I recited its prayer as I waited to hear where my stepdaughter had been accepted to college, while my husband was operated on for two blocked kidneys, when my stepfather underwent cardiac ablation. I say it and I think of my grandfather, crouched on that naval ship all those years ago. He gave a piece of faith to me, not just a piece of plastic-covered paper. Now and then, I believe it’s saved me too.

See All Posts by Amanda Fortini

Amanda Fortini is a writer who divides her time between Livingston, Montana and Las Vegas, Nevada.