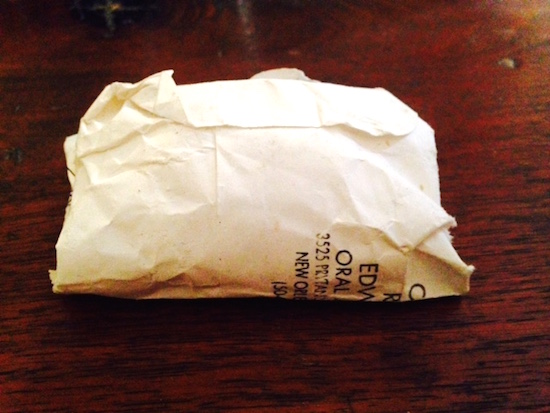 For about ten years my husband and I shared a massive dresser that we recently decided to replace with something less oppressive. Cleaning out the narrow top drawers, useless except for collecting detritus, was liberating. But one thing I could not throw away was a tiny, lumpy, white envelope, which was sealed and handed to me about twenty-five years ago, and which I have never opened.

What I remember most about having my wisdom teeth removed: twilight anesthesia snaking through my limbs, a photograph of the handsome oral surgeon’s boat on the wall, the crunching, tugging and crumbling in my mouth of the once useful parts of my body, built over years from my own DNA. But as soon as they were extracted, wrapped in gauze (you can feel it through the envelope), and returned to me, they defected to the mute world of objects. Even so, I could never manage to throw them out. I have moved them to seven different apartments and houses, and probably as many dressers. Over the years, contact with them would cause a frisson of fear and revulsion but also ancient relief.

Around the time of that surgery, in my early twenties, I briefly lived in Italy and when visiting medieval towns would track down their elaborate reliquaries: the head of St. Catherine of Siena, illuminated by depositing a 200 lira coin in a box; St. Anthony’s tongue in Padua; St. Thomas’ finger in Rome. Relics sometimes held so much authority that warring towns would strategize to steal them first in order to dominate and demoralize.

Though white was a popular color for medieval reliquaries, my little envelope holds no conquering power. The teeth are my momento mori, a reminder of the finite materiality of my body, the smallness of my existence. I can’t let go of these stony fragments of myself, snapped off from the continuum of thousands of years of human reproduction, helping an oral surgeon fuel his boat, helping me maintain domestic contact with death.

During the dresser cleanout I’d revealed the story of the teeth to my husband, and weeks later our younger son lost one of his. After playing tooth fairy, my husband came into our room and asked, “What should I do with it?” He grinned with his new knowledge. “You want to put it with yours?”

He held it out to me; it was a tiny incisor with a bright spot of blood and gum at the root. I pointed to the envelope’s new accommodations, a knock-off Second Empire bedside table with a marble top and prettily carved drawer, a few inches from where I was lying.

See All Posts by Anne Gisleson

Anne Gisleson lives in New Orleans and her book The Futilitarians will be published by Little, Brown in August of 2017.