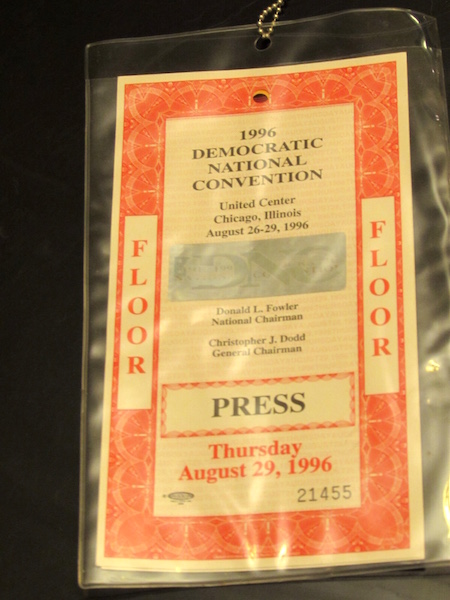 My object: a press pass to the 1996 Democratic Convention, held at the United Center in Chicago, August 26–29, 1996. The Democrats nominated Bill Clinton for president at this convention, and he went on to defeat the hapless Bob Dole that November. The press pass was printed, it says, by the American Bank Note Company, and it looks and feels like currency — appropriate for the president who deregulated banks like no one before or since. The vinyl case enclosing my press pass is stamped “BellSouth” — also appropriate for this man who deregulated the telecoms in that very same year.

I went to that convention, if memory serves, with some other guys from the Chicago Reader and also a French newspaper editor who was in town to see the show. When I think back about it from twenty years later, it represents to me everything that was fraudulent and nauseating about the Clinton-era Democratic Party.

First, the journalistic narrative. In bringing the convention to Chicago, Clinton was supposed to be healing the wounds inficted during the last Democratic convention to take place in Chicago, the disastrous one in 1968. So right off the bat you had that annoying assumption that the Boomer generation was the center of the universe, combined with crocodile tears about how the country “came apart” in the Sixties and how Bill Clinton was helping us recover or something.

To make sure the protesters didn’t get out of hand this time around, there were actually protest pens outside the United Center, where caged protesters would froth and rage while the rest of us walked by.

They weren’t the only ones treated like zoo creatures. In the media tent, the Democrats or one of their corporate allies would hand out free food at certain hours: Big thick Chicago style pizzas, hunks of cheesecake, stuff like that. I remember the media types dropping whatever they were doing and literally running for the corner of the tent where the food would appear, mobbing the counters at the appointed time. It was actually dangerous to be around them.

The great and awesome takeaway moment of the convention was supposedly Bill Clinton’s speech, in which he promised to build a “bridge to the twenty-first century.” This was supposed to be soaring rhetoric anticipating the information age or something, but it struck me as just completely hollow, some market-tested formula which obviously meant nothing. It’s not like we needed Bill Clinton to make time advance on its way. We were going to get to the twenty-first century regardless of what he did.

Anyhow, sitting way up in the gallery, I got to see Clinton utter those words with my own eyes, and for that reason they have always represented to me the very pinnacle of political banality.

I also remember, either immediately before or just after he uttered those words, the Democratic operatives running through the hallways of the auditorium, handing out placards for people to wave so it looked like we really cared.

I often think of another object I got at that convention: A box of Kraft macaroni and cheese, in which the mac-bits were shaped like little donkeys. Where, oh where, did I put that yummy treat of the mid-1990s?

See All Posts by Tom Frank

The subject of Tom Frank's most recent book, Listen, Liberal!,is the Democratic Party’s failure over the last few decades to do anything really meaningful about income inequality.