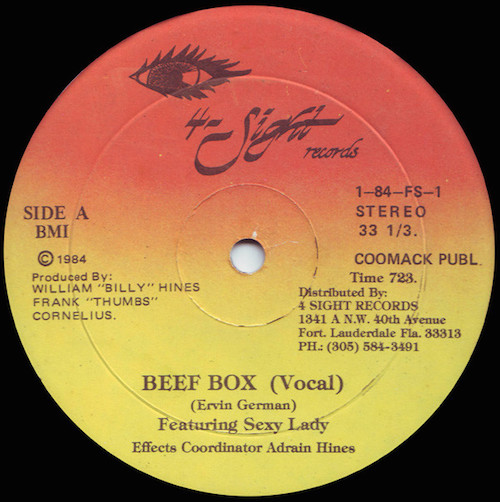 On January 1st, 1984, at age 12, I started a journal with a plan to document the Orwellian realities of the year. President Reagan (Big Brother, duh) had lied a lot, since taking office, and the media let him get away with it; I wanted to stand up and publicly demand the truth. On January 10th, a little old lady did just that in a Wendy’s commercial: “Where’s the beef?”

The three “Where’s the beef” commercials, starring Clara Peller, were insanely popular. Asked, by Bryant Gumbel, what Peller’s appeal was, the commercials’ director replied, simply: “She’s real.” Peller challenged the fake. She was a direct challenge to the whole day-glo façade.

”Where’s the beef” became the political question of the year: Walter Mondale used it against Gary Hart in the Democratic primary debate. (He should have used it against Reagan too.) A fourth Wendy’s commercial, in which Peller shouts down a lying politician, was supposedly filmed — but it never aired. Too incendiary?

One summer night in 1984, as I was working on my journal, the novelty song “Where’s the Beef” — produced by the aspiring Nashville DJ Coyote McCloud — came out of my radio. I heard it on Dr. Demento’s weekly radio show. Wendy’s didn’t sue McCloud; instead, they flew in Clara Peller so he could re-record the song with her! (They helped distribute the record, too.) I rushed out the next morning to buy it — but they sold me a different “Where’s the Beef” 45!

The pre-Internet meme spread. “Where’s the Beef” inspired a lot of musicians. I own 19 “Where’s the Beef” discs from 1984. (Rock and roll, country, polka, reggae, samba, electro rock, and hip hop). Many channeled Clara Peller but they all wanted to push through to the real. My favorite, I think, is “Beef Box” by MC Cheif and Sexy Lady. This one rolled out of a record store in a Fort Lauderdale mall. In fact, Sexy Lady was a clerk at Royal Sounds and Ervin German (MC Cheif) was a customer. These are two super-confident rappers: They are totally going to find the beef, and we are welcome to come find it with them.

Some “Where’s the Beef” records directly called out Reagan: “Hey Ronnie, Where’s The Beef?” was a folk/country version by Tony & Bo. But even the ones that didn’t were political records. That’s because Wendy’s 1984 slogan — created by legendary ad man Cliff Freeman — might just be the only revolutionary slogan penned on Madison Avenue. This should give us pause, since in Orwell’s 1984, Emmanuel Goldstein’s radical book was covertly written by the state. Still, whenever I listen to “Beef Box”, I turn into Winston Smith: Enough with the lies. Where’s the beef?

See All Posts by Benjamen Walker

Benjamen Walker is the host of "the theory of everything." He is a founding member of the Radiotopia podcast network and he lives in New York City.