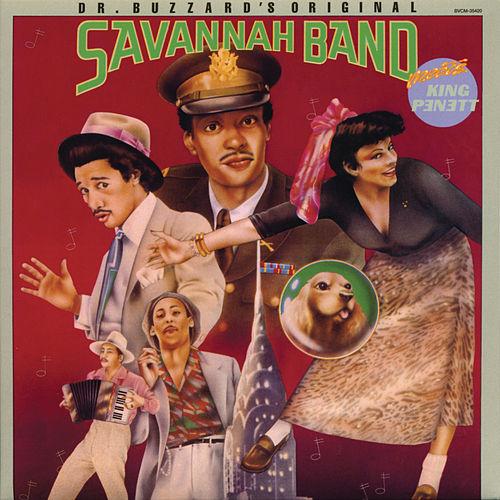 Like many second albums, the packaging of Dr. Buzzard’s Original Savannah Band’s sophomore effort, Meets King Pennett, from 1978, reflected the success of the band’s debut while auguring increased commercial viability that never arrived. It sports a similar airbrushed illustration of group members, but this time they float above the Empire State Building. The album folds out into a 12” x 24” illustration that mimics a movie poster. Inside, all the song lyrics are printed on one side, with yet another movie poster detailing the personnel on the other. Some of the tracks seem designed to reignite the first LP’s success: “Mister Love” is a pastiche of post-WWII soldier-worship swing tunes; “Transistor Madness” a borderline passé tribute to portable radio addiction. Other fare is just odd: an oompah band graces “The Organ Grinder’s Tale,” the ballad “Nocturnal Interludes” wallows in vaguely Gallic post-coital ennui. Half of the similarly Francophilic “The Gigolo and I” is in French.

The group’s sensibility already waxed eccentric, formed as it was by two half-brothers from the Bronx, August Darnell and Stony Browder, Jr., so obsessed with Cab Calloway and tropical kitsch that they brought it wholesale into the disco era. In his autobiography, Hitmaker, their former manager Tommy Mottola described how seriously the Savannah Band took their obsessions: “The group’s costumes were not costumes. Their costumes were their street clothes. [August Darnell] wore zoot suits every minute of every hour of every day. He probably slept in his zoot suit. Other guys in the band wore baggy pants and old newsboy caps.”

While Meets King Pennett layered European influences over that (France on Side One and Germany on Side Two), its most subversive track, “Soraya/March of the Nignies,” returns to the tropics — pre-Castro Cuba specifically — to incite black gun violence against white American visitors with a taste for race-mixing, and their offspring. “Upstarts who claim that they’re the master race,” singer Cory Daye calls them (in Darnell’s lyric). The band delivers this call to arms amid cutesy ukeleles and cowbells, telegraphing the sauciest possible irony, as the band’s key members came from mixed-race households themselves. “My home and my family,” goes the song’s complaint, “Overrun by half-breeds!/Something’s got to be done!”

Meanwhile, pure silliness abounds — the big band whistles and gobbles like turkeys during the bridge. All the peppy music masks the homicidal provocation to reverse genocide, and somehow leaves us with a refreshingly daffy message of resistance, perhaps not to be taken literally by POC so much as relished as a revenge fantasy, thanks to the Richard Pryor-ish humor surrounding it: “Kiss your daddy and wish him well/’Cause he’s off to make the world/A darker place to live/Father knows best!” “Soraya” is “Kill the White People” four years before Eddie Murphy’s classic SNL sketch. But in the context of American race relations, it doesn’t seem all that daffy. “Soraya bring big gun,” Daye cheers, “And let’s have some bloody fun!”

See All Posts by James Hannaham

James Hannaham has published a pair of novels: Delicious Foods, a PEN/Faulkner Award winner, New York Times Notable Book, and current Hurston/Wright Award finalist, and God Says No, a Lambda Book Award finalist. He practices many other types of writing and art, and teaches some of them in the Writing MFA Program at the Pratt Institute.