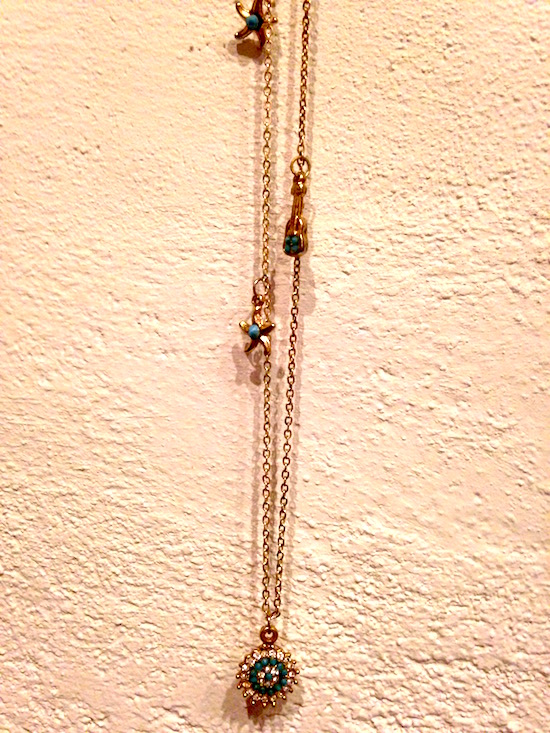 A 20-year-old girl named Salam — “peace” — gave me the necklace in March of last year, when I was in Greece reporting on the refugee crisis. I met Salam at Piraeus Port, not far from Athens. At the time my only association with Piraeus was Plato’s Republic (it’s the setting of the famous Socratic dialogue about the perils of democracy, the problem of tyranny, and his faith that philosopher-kings could provide elusive social unity). Today, Piraeus is a bustling commercial and tourist center. When I visited it was also an impromptu city, a makeshift camp where 6,000 asylum seekers from Syria, Afghanistan, Iraq, and elsewhere were staying while they figured out how to push further north into Europe. The borders had recently been shut down, and their prospects were newly uncertain. The Greek people, in an astonishing act of mass generosity, stepped in where the insolvent state couldn’t, providing the bulk of the tents, clothes, food, and medical care necessary for the tens of thousands of refugees suddenly stranded in their country.

I was immediately drawn to Salam’s charismatic indignation. She was angry, not beaten down, expressing her straightforward and righteous conviction that everyone at the camp deserved better — that they deserved to be treated well and to live without fear. When she smiled, though, or spoke of her favorite songs, I remembered that she was just a kid, younger than my little sister.

Over three more meetings her harrowing story came into focus. She was from Aleppo and traveling with her teenaged brother, Youssif, and had been at the port for twelve days. She had been a music student, an accordion player to be precise (a fitting field given her pathos). Salam and Youssif left Syria after their mother was shot, hit by a stray bullet while making tea in the family’s kitchen. By the time we met, they had already been on the road for nearly two months, and had faced off against criminal smugglers and ISIS henchmen. They wanted to get to Austria, to their elder brother and his wife, and to find a way for their parents and younger siblings to eventually join them.

It would take them almost six months to reach their destination, living outdoors in camps or sleeping rough in forests with little food (they survived for weeks on almost nothing but mortadella). They’ve made it, and are grateful, but the struggle continues. A small gang of young men harasses them at their new apartment nightly, making them feel unsafe and unwanted. But I have no doubt they will persevere, and that Austria, or whatever country they finally end up calling home, will benefit from the courage, ingenuity, and humor they demonstrated in the face of unimaginable adversity.

The necklace given to me as a token of friendship is not fancy, but precious. A simple chain with four pendants including a little guitar, which reminds me of Salam’s creative ambitions, her dreams that go beyond basic survival and security. When I think about where it has been — besieged Aleppo, in a Turkish jail cell, on a precarious rubber dinghy crossing the Aegean Sea — I’m humbled and ashamed. It reminds me that nations and borders are fictions; that all lives have equal value; and that the ideal of inalienable human rights — what Hannah Arendt called “the right to have rights,” even when one is displaced and dispossessed — remains unfulfilled but as powerfully important, and potentially world-changing, as ever.

See All Posts by Astra Taylor

Astra Taylor is a writer, political organizer, and director of the documentary films Žižek! and Examined Life.