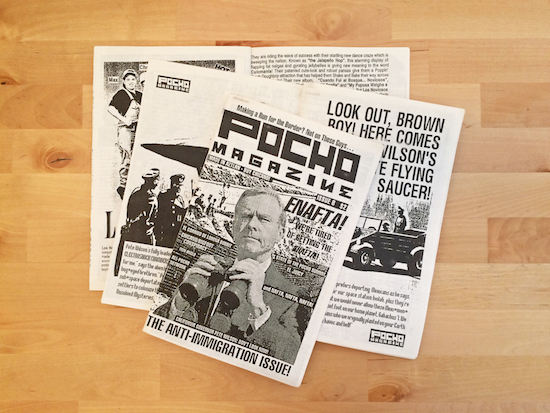 It was the mid-1990s. Access to the internet involved a dial-up modem. Seinfeld was the top show on TV. And California politics were inflamed by a wave of anti-immigrant rhetoric: Proposition 187, a ballot initiative that sought to deny public services to the undocumented, and the re-election of Governor Pete Wilson, a staunch 187 supporter, whose campaign wasn’t above straight up fear-mongering. (“They keep coming,” intoned one of his ads, “Two million illegal immigrants in California.” Cue the scary music.)

Into the era’s cultural fray entered a crudely made, black-and-white satirical zine called Pocho Magazine that took all of that political vitriol — and launched spitballs at it.

It featured fake television listings for shows called Tunnel to Tijuana and Eight in the Trunk. There were Family Circus comic strips, stripped of their captions, and reimagined as a series called Those Darn White Kids. And there were the sublime ads — for invented products such as the Latino Hair Club For Men, which featured a photo of then Mexican President Carlos Salinas de Gortari with the lines: “Having trouble projecting authority? Are foreign countries having their way with your economy? Losing Respect from indigenous populations? … Call 1-800-MELONES.”

Pocho, which ran from 1988 to 1998, was created by Berkeley-based comedian Esteban Zul and L.A-based artist and satirist Lalo Alcaraz (who now pens the syndicated comic strip La Cucaracha). At its peak, it had a circulation that neared 20,000 copies.

Pocho was — and still can be — a derogatory term flung at Mexican-Americans who speak little Spanish or are otherwise considered uncultured. But Zul and Alacaraz took it as an underdog badge of honor. Pocho Magazine made mincemeat of xenophobia as well as political correctness. It was unconcerned with sacred cows, and rife with gags about Edward James Olmos and Pete Wilson.

A two-page spread in issue #6 (my favorite) features Wilson in a Nazi uniform, before a sign that reads, “das Pochos Verböten!” Another story, in the same issue, purports to show the connection between Chicanos and Sasquatch. Among the evidence: Both are “rarely seen on film” and are “known to attack rednecks.”

Pocho so intrigued me when I first laid eyes on it that I sent a check to a Berkeley post office box, after which I started to receive Xeroxed missives with titles such as “Pocho Villa” and “Mariachi Madness” — not to mention #6, “The Anti-Immigration Issue,” with its cover shot of Wilson and a cover line that read: “ENAFTA! We’re tired of getting the shafta!”

I’m not Mexican. (My parents hail from South America.) But the magazine was one I felt great affinity for. I too am the daughter of immigrants. I too have had relatives without papers. I too have had those moments in which I’m told I don’t belong. Pocho addressed the nuances of that in-between identity — and it did it with rage and glee.

It may no longer exist as a magazine. (Pocho later morphed into a humor site, Pocho.com.) But the handful of old issues that survive in my care feel like an instruction manual for the present: Face the haters with blazing wit — and an extended middle finger.

See All Posts by Carolina A. Miranda

Carolina A. Miranda is a staff writer at the Los Angeles Times where she covers art and culture.