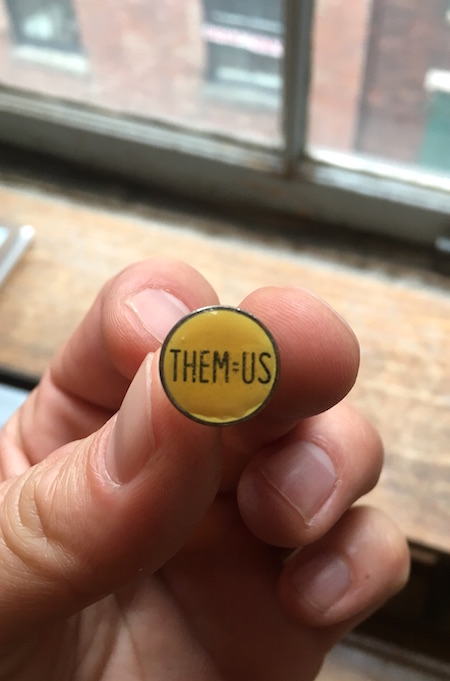 I was 13 when my father died. Even as he lay on the bed, frail, and life gone from him after years of fighting cancer, he was big. Physically he was big. He made big work. He saw the world and its people in a big way. He had a big heart. He made my mom and my sister and me feel big.

He was a designer. Sometimes, to hang out with him after he died, I would revisit his work. Whether it was by wearing a watch, or carrying an umbrella in the rain, or piling a stack of ideas underneath one of his paperweights, I could recall the bigness of his thinking through the objects that he’d left behind.

I don’t remember when exactly, but a number of years ago I was looking through the archive of M&Co, the design firm he founded, and I found an original THEM=US pin. The simple message moved me. It was a big way of thinking packed into such a small and friendly object.

I have kept the pin near my desk in my studio ever since finding it. In the current climate, the pin has a renewed significance, as important as the day I re-encountered it, or the day my father, Tibor, created it. Them=Us is a timeless message, a small reminder of a bigger truth.

Our differences are beautiful and connective and should be celebrated.

See All Posts by Alex Kalman

Alex Kalman is the founder of the interdisciplinary What Studio? in New York City. Most recently he opened the exhibition Sara Berman’s Closet at the Metropolitan Museum of Art and created Op-Object for the New York Times.