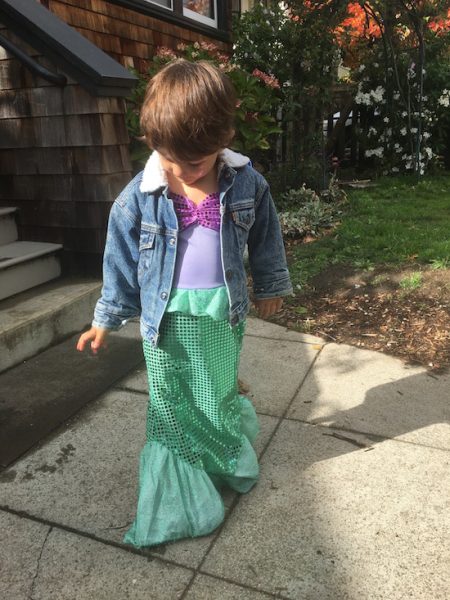 For a while, our three-year-old son loved wearing a mermaid costume.

I do not mean a merman costume, a concept he inveighed against. No, this was a mermaid costume, and when he put it on, he became a mermaid.

This thing is cheap, factory-made, and modeled on Ariel, from Disney. So many pink and green sequins, so much purple polyester.

Our son, as far as we know and can tell, does not suffer from gender dysphoria. He doesn’t want to wear all dresses. He wants to wear the mermaid costume.

He requested the purchase as it whipped by in an online shopping trip before Halloween. Was he sure he wanted that one? The sequined one? The green and purple and pink one? Yes.

So we got it for him. Along with lion, kangaroo, and penguin costumes, which he also managed to extract from us before October 31st.

He loved all these costumes. But he really loved the mermaid one. In fact, it was the only article of clothing that we could convince him to wear when it might be inappropriate to be naked, like when repairmen show up or during a holiday party with a gaggle of our neighbors. (Few people are comfortable with a little-kid penis hovering over the hummus.)

All this to say: we fully expected that he would request to wear his mermaid costume to the school Halloween parade.

Would his teachers think he was questioning his gender? Would a parent say something disparaging? Would a kid be mean about it? Had we become impossibly dated in our views about gender because fuck all those received notions and why is it OK to pretend to be a female kangaroo but not a mermaid, which is not even a real thing? But even if our principles were right and true and our school was as LGBTQ friendly as it is possible for a school to be… what if someone hurt his feelings, even accidentally?

Of course it was happily within our political repertoire to have a kid who was smashing gender formats. Of course we want to shield our kid from psychological harm. Of course the younger generations would think we were ridiculous fuddy-duddies for even considering some ruse to get him to pick the lion or the penguin — and isn’t this heartache about us and how we feel and our own damaged conceptions of what it is to be a boy, a girl, a man, a woman? Of course it is ridiculous that there would be so many political valances to this sequined piece of shit.

On the morning of the parade, he chose the lion nearly instantly, the very ease of his decision a rebuke to our outmoded sensibilities. He spent the day slightly annoyed at the Velcro that attaches the mane around the face.

In the months since, I’ve come to realize that our son has continued to be exactly who he is. And that person would not have been hurt by a few barbs about dressing like a girl. He’s not gender atypical, but very internally motivated. He loves mermaids as a category of sea creatures, along with the other things he drew this week: a mimic octopus, a sea snake, a Pacific octopus, a siphonophore, a Humboldt squid, a colossal squid, a blue-ring octopus, and a colony of aggregating anemones.

In other words, he may have more interesting social problems than being teased about gender.