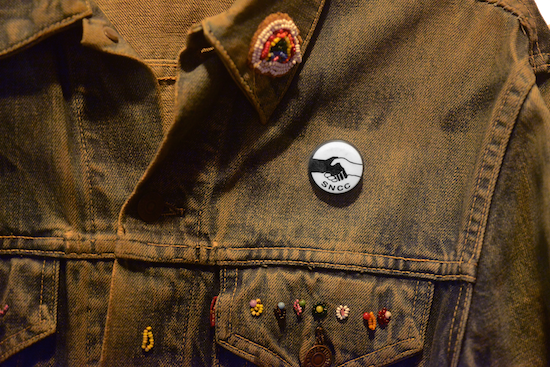 This button was my badge when I was an organizer in the civil rights movement in Mississippi, beginning in June of 1964 and continuing into early 1965. It is pinned to the dungaree jacket that was part of my unofficial uniform during that remarkable time. The button displayed the insignia of SNCC, the Student Nonviolent Coordinating Committee, a group founded by young black students in Raleigh and Greensboro, North Carolina in 1960.

In the summer of 1964, SNCC, working as part of the Congress of Federated Organizations, invited student volunteers to Mississippi to participate in a “Freedom Summer” of movement-building and massive voter registration. It was aimed at upending an entrenched system of racial segregation that had violently denied black folks the ability to vote and exercise many other fundamental rights of citizenship.

The SNCC pin imagined a world in which blacks and whites would join in a movement to bring about an end to the regime of white supremacy that had been an intrinsic contradiction contaminating American democracy since its inception. The clasped hands, black and white together, suggested a society in which the common good of humanity, from generation to generation, would become the overarching principle. We are not there yet.

While at a training camp in Oxford, Ohio, preparing to go to Mississippi, I quickly learned that our mission would not simply be an act of civic altruism. At a mass meeting on the evening of June 21, 1964, in a hall filled with civil rights veterans and green volunteers such as myself, a sudden announcement delivered by SNCC Executive Secretary James Foreman alerted us to the cold fact that we were entering a war zone, one where those who ruled would see us as nothing more than enemy combatants. Three of our comrades — James Chaney, Michael Schwerner (whom I knew), and Andrew Goodman — had been disappeared in Neshoba County in eastern Mississippi. The announcement transformed an evening of talk and song into a long silence. Not a word. In that moment, forty-four days before their three broken bodies would be discovered in an earthen dam near the town of Philadelphia, we knew what had happened. We all knew that their fate could be ours.

And then, one voice could be heard from the back of the hall. Nedra Wynans sang a low and mournful verse of “Will the Circle be Unbroken.” Many others of us joined in, low and mournfully, but oddly emboldened.

The next day, we piled into cars heading to Mississippi, wearing our SNCC pins and overalls, preparing to join black Mississippians in their long struggle for freedom, a struggle that still remains unfulfilled there and elsewhere in our “land of the free.” I would remain in Mississippi beyond the Freedom Summer and eventually be invited to become part of the paid SNCC staff (ten dollars a week, minus 44 cents in taxes) as a field secretary. I have never been more gratified by anything I have done than by having been a member of that short-lived, soon-to-implode organization.

I need to add that while I was in Mississippi, though the prospect of a violent death was always near, and I experienced it firsthand, fear did not dominate me. I found an inner calmness that became a part of me. Learning from local people whose determination and courage were boundless, I discovered that there is nothing to fear, and that the still distant world symbolized on the SNCC pin is something worth living or dying for. I learned that it’s not about how long we live. It’s about what we do with our lives.

See All Posts by Stuart Ewen

Still a political agitator, Stuart Ewen is also Distinguished Professor at the CUNY Graduate Center and Hunter College, author of many books and a leading expert on the history of media, consumer culture and propaganda.