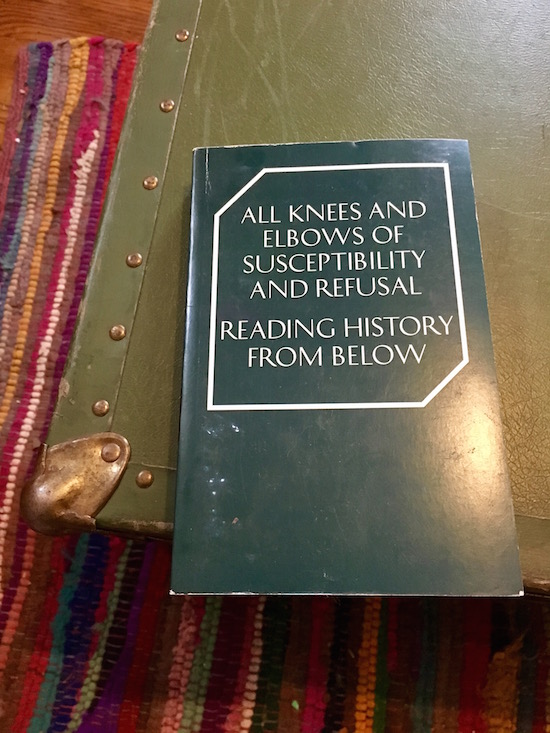 This summer I was walking with some friends in London’s East End, and one of them — an author of the book in the photo — said we were walking toward the proposed museum of working class women’s history which became the museum of femicide, i.e., the museum of Jack the Ripper. I was upset, but when we got to the corner what we found was a billboard about the Matchgirls Strike facing down that horror.

I’m not just kept sober by drinking the water of history: it’s also been my tonic. If I never knew that slaves revolted, if I never knew that women fought their rapists, if I never knew that peasants took back the land, I’d be discouraged as any other gaslightee, made crazy that mutual aid is in constant evidence, but never on TV. Early on in life I started building a memory palace of resistance, of the accruals of collectivities, of how and who never falls for the tricks meant to discourage us. Without it I would never know the violence of the world and its disproportionate effects on certain types of people is not imbued in every atom of it nor is it what arrives ex nihilo.

Everyone, I think, should make a radical account of where they are from, share the specific techniques of susceptibility and refusal that made them, and if they are of people abstracted into circulation so fully by global capital that they are from nowhere, the history of that nowhere is even more important. Politics right now is kept off-limits via paradox: the not-any of what we really need packaged in the too-much we can’t stand. Any crescendo that never stops crescendoing is functionally a flatness, an unbearable and mortuary horizon. It is the violence of living deprived of any real sense of history, that flat-lined gloom of “it has always been” as an obstinate and crushing “so it will always be.”

Maybe I picked this book because the political subject is my political object. But maybe I also picked it because it is about something else, which is the quiet conspiracy of solidarity that arises between strangers, that they might send email and poems and packages, eventually become friends. Then, despite how unlikely, they might find themselves walking down the street despairing of difficult histories until other ones, necessary and true, arise as evidence. Then, in the women’s faces, they are reminded again of history as a path to the world.

See All Posts by Anne Boyer

Anne Boyer is the author, most recently, of Garments Against Women (2015).