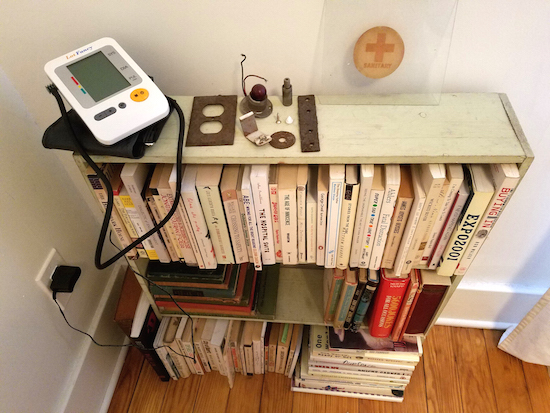 Too many steroids (the go-to when other meds for my various chronic illnesses don’t cut it) and, uh, recent election results had my general practitioner deeply concerned about my blood pressure, which had gone Stage II Hypertensive in a matter of weeks. She prescribed a medicine with too many vowels and demanded I buy a heart-rate monitor, both of which “suggestions” I managed to completely ignore on the argument that I am a slim woman in my mid-forties who weighs 113 pounds, meditates every day, and has never had anyone say anything about her blood pressure besides, “Holy crap, that’s low. Are you even alive right now?”

I rethought my automatic rejection as the inauguration date neared. I remembered my GP asking through slightly gritted teeth as she removed the cuff from my arm, “Have you had any of the warning signs? Headache, chest tightness? Light headedness?” I hadn’t, at the time that she asked. But between the tossing around of cabinet appointment names and deepening concern for my all-Muslim neighbors, I started to. When the days-old 115th Congress bid to repeal the ACA — which could leave me with months to live — went down on January 5th, I felt tingly and strange. I caved.

I use it every day. Weirdly, it’s become a rare source of good news in my life. Turns out — OK, we can see this reflected in politics too — surveillance really is control. For a while I could map news events to spikes in readings, but after some time, I figured it out: If I get up, make a handful of phone calls to various elected officials, eat breakfast, limit my coffee intake, work out, keep the news off, and meditate for 20 minutes right before I check it, I can achieve some semblance of a healthy heart rate. Unless the ACA repeal amps up again. Then all bets are off.

The LotFancy sleeps in my bedroom. It is not sexy, so I have to navigate that as a single woman who, ah, likes to “stay active.” Then again, it serves as a reminder of just how personal politics really are.

Anne Elizabeth Moore is an award-winning journalist and cultural critic, now based in Detroit. Her next book, Body Horror, comes out in April.