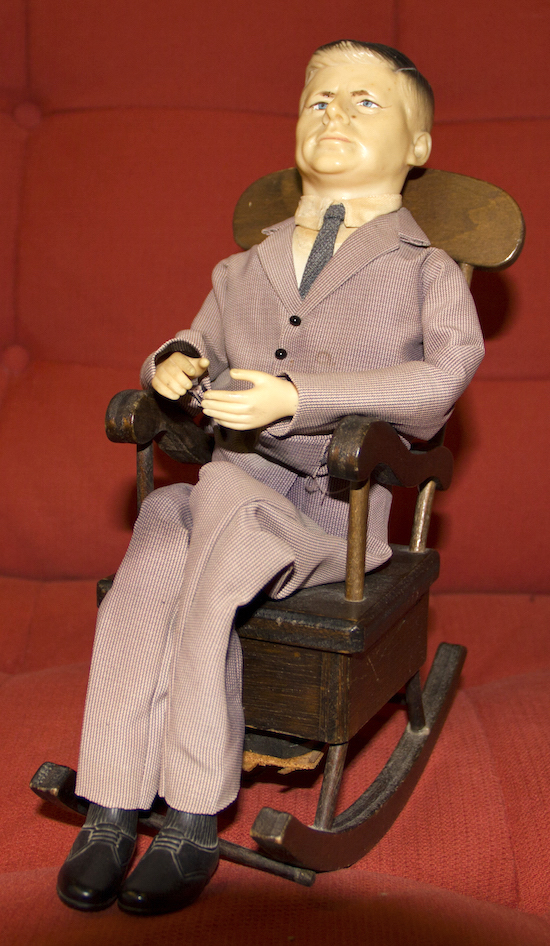 In 1963, the year John F. Kennedy was murdered, Kamar Incorporated, a Japanese novelty company, produced a doll version of JFK sitting in his famous Oval Office rocking chair — a therapeutic device to ease his chronic back pain. The chair doesn’t look like the original, yet Kennedy’s likeness is fairly accurate. The version I found a few years ago has him wearing a brown suit, white shirt and tie, black vinyl slip-on shoes, and simulated socks. His body is solid, but his limbs, a wire armature, predict the withered physical deterioration that his Addison’s disease might have caused had he lived. Scores of Kennedy souvenirs were produced during his lifetime; this one is eerie.

At 10 years old, in the late summer of 1960, I met John F. Kennedy. It was my first trip to Washington, D.C. I had just entered the large elevator in the Capitol Building with my uncle’s girlfriend (later, his wife), who worked as a statistician for Life. She had procured tickets to the Senate gallery and a pass for the senators’ private elevator.

As we waited for the elevator operator to close the gate, a voice from the hall bellowed: “Hold on.” A tall, heavyset man with Buddha ears entered the car. I didn’t recognize him; it was Senator Lyndon Johnson. Kennedy followed. I stood staring in awe, my heart pounding, mouth shut.

In 1960 I was JFK all the way. He was young, handsome and heroic, nothing like the flaccid doll. During his campaign, every day after school I worked at his campaign’s storefront headquarters in an empty Horn & Hardart Automat on East 42nd Street (where later the Philip Morris headquarters was built). I ran a movie projector that repeatedly showed a promo film with Frank Sinatra’s voice-over singing “Vote For Kennedy” to the tune of “High Hopes.”

That’s how I met Kennedy for the second time. Right before the election, a rally was held at the old New York Coliseum with a star-studded cast, including Sammy Davis Jr., Peter Lawford, Sinatra, and dozens more. I was given tickets. The hall was packed. Drawn by some inexplicable chutzpah I left my parents and shoved my way through the enormous crowd to the foot of the stage where one of the VIPs, who knew me from the automat, grabbed my arm and pulled me onto the stage just as JFK was walking off. He shook my hand. I never wanted that moment to end.

JFK was larger than life. This effigy is just 11″ tall and sits on my desk as a reminder. Oh yes, other than the tragic year it was made, there is another cruel irony. The chair is actually a music box that plays “Happy Days Are Here Again.” The one I have is broken.

See All Posts by Steven Heller

Steven Heller, cochair of SVA MFA Design, is the author of over 170 books on design and political art.