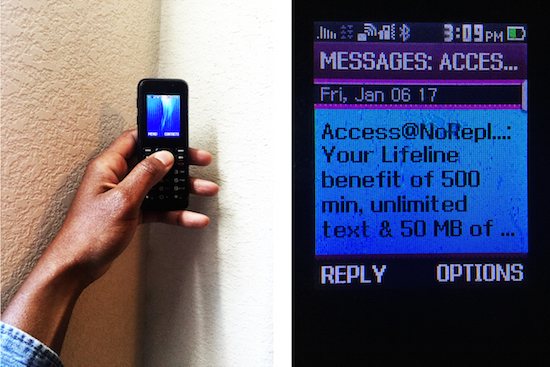 I call it the Obama Burner. The federal government calls it Access Wireless with a “Monthly Lifeline Benefit of 500 minutes, unlimited text and 50MB of data.” It’s four and a half inches of nostalgia amidst mini-computers masquerading as telephones.

After my white-girl-tearful-payment-negotiations with AT&T proved obsolete and working pay phones became increasingly rare, I lived persona non grata in the immediate aftermath of grad school. A three-tone jingle greeted would-be callers, woO-wOO-WOO “this number is no longer in service,” and other embarrassments. Since Skype was WiFi-dependent, I navigated between employment landlines, Starbucks hotspots and #emailGameStrong, while holding onto the nightmare of class mobility. Dream deferred.

Phonelessness is a poverty marker that I thought I’d outgrown due to my fancy sheepskin and expanded palette, courtesy of Whole Foods. I was mistaken, Seventh Generation, 360, and Mrs. Meyers be damned. But I’m resourceful enough to know the public assistance game. The intrusive paperwork, the line waiting, the hold music, the just-enough-to-tide-you-over-ness of it all. Like a double-dutch turn of the rope, I can gauge the sweet spot to hop in and start jumping.

I got put on through my similarly poor and artsy colleague and copped my own burner in 2013, a padded envelope sent ‘in care of,’ since I didn’t really have a home address. I still don’t. I also don’t deny the visual drama of whipping out my artifact; a living fossil from the earlier days of cellular communication. My number taped to its backside, it’s a performance that exaggerates the contemporary reality that no one memorizes phone numbers anymore — evidence of our shrinking attention spans. Chiming with each stroke, the contemplative tedium of keypad texting is highlighted, inspiring concise communiques or (gasp!) actual person-to-person phone calls.

My burner disrupts the accepted methods for communication in two-thousand-teen, and I gleefully advertise my 500-minute limit as an opportunity to meet for coffee instead. I don’t get mass texts and images on it anymore, plus it’s emoji repellent, so I don’t have to decipher smiley faces and surgical masks as sentiment.

My Obama Burner is black (literally) and it deftly acknowledges that class is mostly birthright (metaphorically). For every telltale ring heard on a city bus, it cosigns that for many folks, automatic bill payment is a recipe for overdraft, credit scores are generational, and the only 10 digits you might assure are the ones on your own two hands.

See All Posts by Kenya (Robinson)

I carry a #WHITEMANINMYPOCKET. I have often appeared in public with a box on my head, I sleep around, and consider myself an artist, socialite, and humanitarian. Others have called me a mischief-maker and shit-starter. I cop to all of these. Mostly though, I am an international southerner, using privilege as plastic material, to get into grown folks’ business...