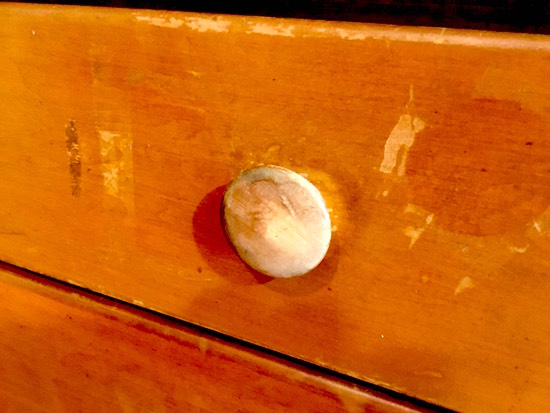 It was 1956; I was ten years old, a fourth grader at John Storey Jenks Elementary School in Philadelphia. 1956 was an election year, the election pitting the same war hero versus the same egghead he’d trounced four years earlier. My mother’s efforts notwithstanding, there was little talk about politics in the house where I grew up. In the house where I grew up, furniture was coin of the realm. The pieces of furniture we possessed all had names: bachelor chest, highboy, piecrust table.

I still have the maple dresser and the maple bed that were part of my childhood bedroom set. The bed has tooth marks along the headboard where I chewed on it when I couldn’t sleep. In 1956 my job was to keep vigil over the night sky for the plane that was carrying the bomb that was going to turn us all to bone and then to ash and then to nothing. I knew about this because I’d seen it happen on Ed Sullivan. The dresser sat across from the bed and next to the console radio set to 1190 AM, WOWO, Fort Wayne Indiana, “the voice of a thousand main streets” that somehow managed to be everywhere, all at once, all night long. My job was to listen whenever I heard a siren, making sure the world wasn’t about to end.

At some point during the election year of 1956, my father gave me a glossy sticker that said I LIKE IKE. I affixed it to the center of the top drawer, knowing as I did that in our family to put a sticker on a piece of furniture was akin to putting a sticker on my little sister. “I can’t believe you did that,” my mother said. Shortly thereafter she gave me a glossy sticker that said MADLY FOR ADLAI. I was ten years old; I had written a get-well card to Eisenhower when he had a heart attack and to my amazement I’d gotten a thank-you card back that my best friend Peggy’s older brother Marto said hadn’t actually been signed by Mamie Eisenhower. Stevenson had holes in his shoes, my father told me. Eisenhower, my mother said, had Nixon.

For many years the two stickers co-existed on the dresser drawer, IKE in the center and ADLAI to the left. At night while I kept vigil they were companions to me, their twin presence reassuring, talismanic even, like the eyes of a single deity. Years later when I decided to scrub the stickers off, they came off fairly easily. With their removal, though, came a sense of regret, of having made a terrible mistake. I remembered those two watchful eyes lit by the light of the 23 Trolley as it made its way up and down Germantown Avenue. The sirens would go off and I would turn on my radio.

When I was a tender and ignorant girl of ten I knew my job when I saw it and I performed it admirably. Now I’m old and the nighttime signal from Fort Wayne Indiana isn’t as strong as it used to be. The dresser drawer is empty of stickers and the threat, when it comes, will come from too many directions.

See All Posts by Kathryn Davis

Kathryn Davis is the author of eight novels, most recently The Silk Road and Duplex. Among other prizes, she has received a Guggenheim Fellowship, the Lannan Award for Fiction, and the 2016 Katherine Anne Porter Award from the American Academy of Arts and Letters.