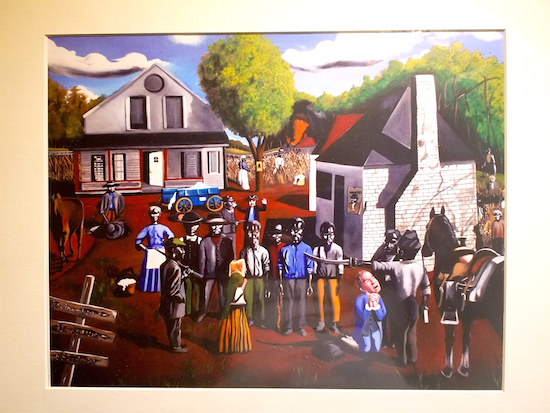 A close friend has given me a print of a beautiful painting. But where to display it? It’s a dilemma.

In the foreground of this painting, an African-American man holds a sword in one hand, a Bible in the other. A white man kneels before him, pleading with clasped hands. Behind them, another white man lies dead, and a group of African-American men with resolute expressions stand by. It appears to be Nat Turner’s Rebellion, which took place in Southampton County, Virginia, in 1831.

I teach in South Carolina. I find this painting appealing, but not because I believe that brown people should be inspired to acts of violence against people that call themselves white. Instead, I’m inspired by the memory of people, who could find no refuge in the established social order or political system, who abandoned their comfort zones — their sense of home and security — in a collective, courageous act of self-liberation. They had to dismantle what was familiar… without yet knowing what a better system might look like. For me it is not the spectacle of vengeance that is cathartic but the release of the internalized violence of resignation and self-loathing produced by repressive systems.

But where can I display my print? Most of the students and colleagues that visit my office and home are southerners who identify as white. The Confederate flag repulses quite a few of them. Yet I’ve seen Confederate flags and memorabilia prominently displayed in some of their homes. My workplace was formerly the plantation of John C. Calhoun; several buildings are named for unrepentant racists and slave owners. Folks who venerate the antebellum South, around here face few professional or social consequences. In contrast, the thought of displaying my print, in my office or home — an image of resistance in which African-American rebels spill the blood of white Southerners — awakens anxiety in my chest.

Why? Because fears of white genocide have been used to suppress Black institutions, to elicit support for divisive slave codes and to justify killings like those at A.M.E Emanuel in Charleston, South Carolina. Never mind that although rebellions like the one in my print were more frequent and consistent than we have been taught, in fact cases of mass race-based attacks of brown people on folks who call themselves white were relatively non-existent. Never mind that uprisings like Nat Turner’s in Southampton were driven more by a desire for freedom from bondage, torture, and forced servitude, than by a desire for vengeance. Never mind that efforts like the Stono Rebellion of 1739 were multi-ethnic. The fact is a conflation of nonwhite autonomy with escalating white oppression has been a key element animating American history and contemporary conservative politics. In this context, displaying my print could be seen as provocative in the extreme.