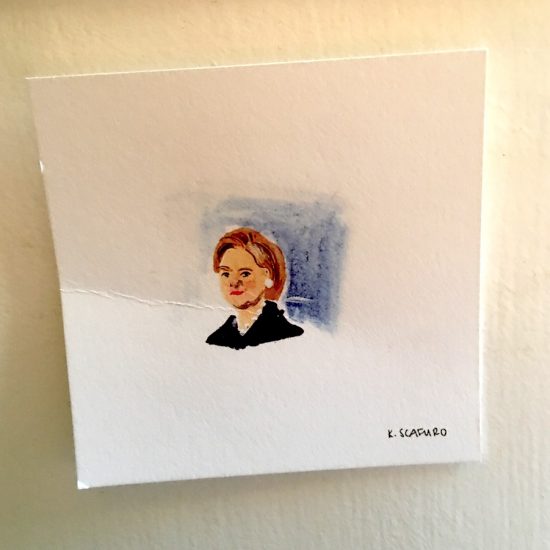 Beside my bed is a miniature portrait of Hillary Rodham Clinton. Americans aren’t meant to canonize their leaders, and that’s why I bought this original artwork from Kimmy Scafuro, a painter with an Etsy shop. It was November 9, a neural fog. Hard to tell desperation from jaw-ache from possibly strep. It dawned on me that my dysphoria wasn’t noble or ideological; men are said to feel likewise devastated by sports. Just another crushed Arsenal fan, then. But I knew to order my little limited-edition print of a gouache painting and I knew, and was right, how ballasted and eventually amused the portrait would daily keep me.

Just as Lindy West trained herself to romanticize bodies like her own — the exquisite delicacy of cellulite and the luscious hills and valleys of human flesh and fat — so I had aimed to acquire actual passion for a woman so straitened as Hillary (and myself). When my daughter was born in 2009, I wanted to imagine for her an exalted life, but as models I turned up only Hildegard von Bingen and George Eliot. Could I really not revere a woman closer to hand? Maybe one who, on account of sharing my country and middle-class affiliation, might even share some of my virtues — and less irresistible qualities of know-it-allism and tonal discordance?

I considered Hillary. Hard. But people idolize Jim Morrison, Vince Lombardi, Marilyn Monroe. They get a pass. So why not get swoony about Hillary — refuse to hear her gainsaid, turn tearful in my adoration? She would be my valiant valedictorian, politically dead for our sins, for America’s thanatotic attraction to America-devastator Donald… his name escapes me.

So I changed my aesthetic. It’s easier than you think. I started with self-pity — what could be easier, right? — for having been trolled and had many days where “shrill” was the best that was said of me. I revisited the workaday sexism and the blunt, low-ceilinged headache of trying to raise children in a vexed marriage.

From there I willed my way into Hillary’s actual life. From “we need to find more ecstatic ways of being!” at Wellesley, in 1969, through law school (Yale, that hard one, shudder; and the bar, and starting a firm), the Children’s Defense Fund, headbands and childbirth, that heroic stab at American healthcare. Then I stuck on the hours she spent in that suffocating death room — was she snacking? Praying? Did tears or terror choke her? — overseeing the hit on Osama bin Laden. Hillary must have thought she was losing her mind, working up all those details, dieting and dieting, always and everywhere under suspicion for being under suspicion for a being under suspicion. And still she stuck it out, living and working in the gaslit chambers, pursuing some vision of America that often seemed overbright in her.

Hillary is not overbright in my portrait. She’s in black. She’s not blond, brunette, pretty, ugly, old, young. She looks wary. She looks like she’s doubting something. She seems like a brilliant bluestocking grandmother from the last century, a figure for the whole quaint American promise — education, systems, meritocracy, liberalism, majority rule, egalitarianism, homework, elbow grease, ingenuity, flexibility, hope, progress, you name it. And I love Hillary entirely, because I’m afraid that when I stop loving her, I’m giving up on the whole shebang.

See All Posts by Virginia Heffernan

Virginia Heffernan is the author of MAGIC AND LOSS: The Internet as Art.