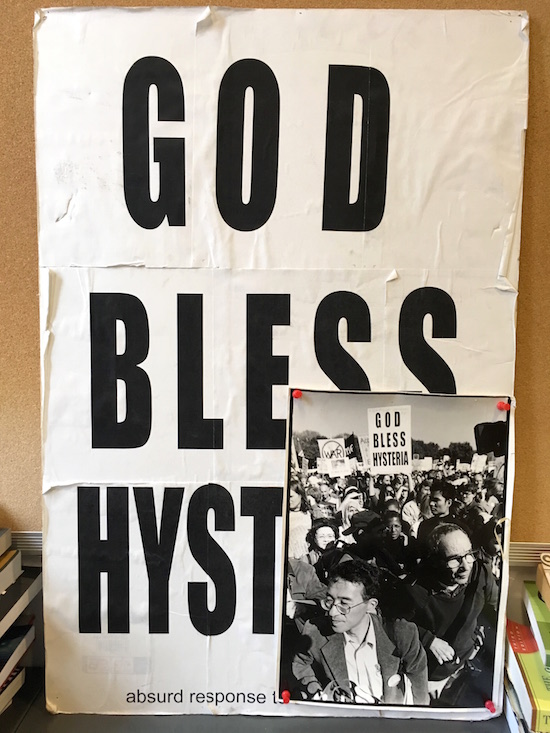 One of our signs read, in large block letters, black on white, “God Bless Hysteria.” Partly to attract the attention of a jaded and jingoistic news media, and partly done to entertain ourselves — and our fellow protesters – after what had become a long string of earnest, boring and ineffectual protests, we were acting upon the underlying premise of all political satire since Jonathan Swift wrote his “A Modest Proposal” in 1729. That is: in revealing the absurdity of the unfolding war we would open the eyes of the public who would then see The Truth as it is (which, of course, was The Truth as we saw it).

At least that’s what we planned. A photo of the sign in situ tells another story. Floating above a crowd of anti-war protesters, and seen from a distance as a spectator may have, the sign does not point to the hysteria of a warmongering government or a complicit media – instead it points to us. “God Bless Hysteria” provided a caption to an image of our protest. We were the hysterical ones, the over-agitated worriers who somehow didn’t understand the sober wisdom of going to war with a country that hadn’t attacked us over fictitious reports of weapons of mass destruction. Our funny, ironic, and oh-so-clever message backfired.

I’ve kept the sign and photo in my office these past dozen or more years to remind myself of the importance of context and meaning (and to remember not to be too clever). The most ingenious of messages, the funniest of performances, will always be interpreted by audiences and in settings we can’t control. People “make sense” of what they see, hear, and read. And in that public act of making sense, there is no guarantee that our sense will prevail.

Or seemingly any coherent sense at all. For now there is Donald Trump, who conjures up fantasies far more absurd than any satirist could imagine. I look at the protest placard, propped behind my increasingly precarious stacks of books, and realize that “God Bless Hysteria” describes our moment, yet is somehow powerless to intervene in an age where hysteria has become common, accepted, politics. Perhaps, at this moment, the answer lies in out-fantasizing the Fabulist-in-Chief: conjuring up common dreams that might inspire many, rather than clever slogans that make the few of us snicker. Utopian, earnest, and a bit corny, I know, but maybe it’s time for that now.

See All Posts by Stephen Duncombe

Stephen Duncombe is the author of Dream: Re-Imaging Progressive Politics in Age of Fantasy and the creator of TheOpenUtopia.org. He currently runs training workshops with artists and activists around the world through the Center for Artistic Activism.