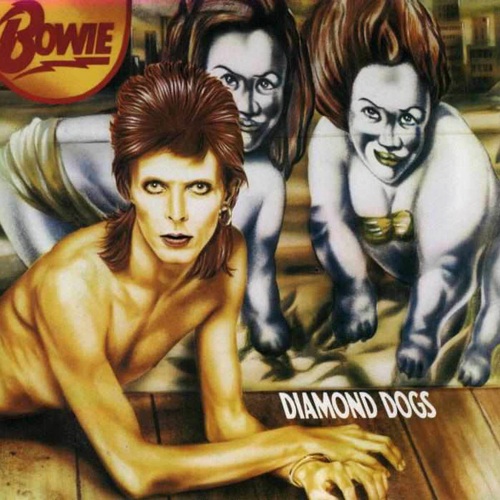 The outside wall of my high school’s gym was emblazoned with the spraypaint hex “David Bowie is GOD,” back when this was a ward for the weaklings and geeks who would pass through that door when they’d rather be drawing spacemen and listening to “‘Heroes,’” and it worked to protect me into gainfully underemployed creative adulthood, though now on my own two platformed feet it no longer means the creation of the world to me when DAVID BOWIE (David Jones, born 1947) makes a great album or the end of it when he makes a bad one. Part of this, of course, is that here in the afterlife of irony you never have to get away from him; the self-aware consumer fetishism of Gaga and interchangeable cultural wardrobes of Latin standards-chanteuses and white hip-hoppers are a pose, and a stance, open to everyone with disposable income and discarded national egotism; the reference-clogged pop culture of the “developed” world and the omnivorously impressionable and endlessly influential roots culture of the “emerging” one are like the flamboyant, anxious everyday that Bowie somehow got rocketed back in time from as sole surviving citizen in the ’70s. His reunions with his native century can be like joyous homecomings for all involved; he used to describe the atmosphere of songs like “Space Oddity” as “nostalgia for a future,” and watching the tapes of his 1990s techno-era resurgence at a TV museum I was surprised by how nostalgic I felt — this was “my Ziggy,” the loopy goateed cyber-squire in the posthuman brocade bathrobe. Bowie’s most recent album was in 2003 and he may have retired unannounced into a future well fulfilled. It’s impossible to say, and that’s good, because if Bowie taught us anything it’s not that you reach the future by getting an answer, it’s that you give it up when you stop asking questions.

On his or her birthday, HiLobrow irregularly pays tribute to one of our high-, low-, no-, or hilobrow heroes. Also born this date: Gypsy Rose Lee.