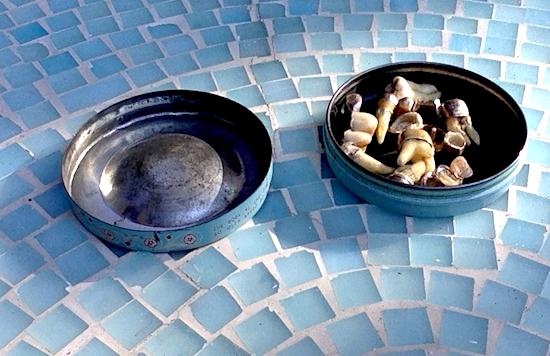 In the top drawer of my dresser sits a light blue tin. It reads Dressmakers’ Steel Pins in arcing letters along the top circular edge and D.F. Taylor & Co. along the bottom. It does not contain a dressmaker’s shiny steel pins, though. Rather it contains a different set of metallic objects equally quotidian and archaic, everyday and mysterious: a handful of gold-capped teeth small as pebbles and forked, or if you like, footed.

On a website about gold teeth I read, “It’s only logical to assume that these items are worth something. After all, why else would your dentist have given them to you?” But my dentist didn’t give them to me. I’ve always had a sweet tooth but I’ve never had a gold one. The truth is I can’t remember exactly how I came into possession of them.

Whenever I chance to open this box (on rare occasion) I get a distinctly sinking feeling they’ve fallen into the wrong hands. Who had they belonged to? How did they get away? But my syntax implies that the teeth have agency: They escape, they get loose, they go places. Like Kafka’s Odradek in the story “The Cares of a Family Man.” Odradek is an uneasy-making nonesuch, a sort of spool with uncertain provenance, who nevertheless talks and outlives you.

I learn from the site that dentists are likely to have “long standing relationships with a scrap gold buyer to whom they will regularly sell metal grindings, floor sweeps, and even floor carpeting from around the area where restorations are made.” Here the dentist appears as a kind of resourceful, frugal recycler, an improvising alchemist, maybe a tad bit unscrupulous. There is something unseemly about teeth fallen out of the head that thinks itself, bones disaggregated.

Who am I to be trusted with remains? And yet we are composed of them — your hair will grow on without you; your metatarsals may be from an ancient coral reef. Your pituitary is decidedly planetary. Over seven thousand years ago, the Sumerians told a story of creation in which Tiamat, Mesopotamian chaos-dragon, goddess of the sea, was dismembered. Her parts formed the heavens and earth.