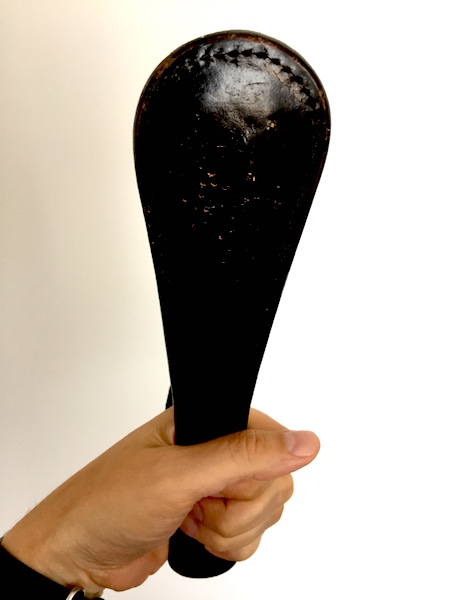 At some point in the mid-1980s, while cutting through the “Arbs,” a park in Jamaica Plain, the now-gentrified, then-marginal Boston neighborhood in which we’d both grown up and at that point still lived, my friend John Dooley stumbled upon a sinister, potentially illegal, altogether excellent object. Measuring eleven inches from the end of its handle to its weighted tip, this “impact device” (to employ the studiously bland terminology of the purveyors of such things) is encased in fetish-worthy black leather. Stamped into the face of its business end is a legend: “Jay-Pee Long Slugger.”

Dooley’s discovery made him the envy of his peers, not least because our neighborhood is colloquially called “J.P.,” so who wouldn’t want a Jay-Pee Slugger? (In fact, as I figured out years later, Jay-Pee was a manufacturer of leather police equipment.) Dooley resisted every offer of cash or barter… but I had something he wanted. My grandfather, a chaplain on the U.S.S. Alabama during WWII, had — despite having served in the Pacific, not the European Theater of Operations — somehow acquired a German Iron Cross medal. How did he get it? I’ll never know. I’ve never been interested in family heirlooms — and he died a long time ago.

So although I should regret trading Grandpa Les’s war memento, I don’t. I love the Jay-Pee Slugger. Whenever I’ve handled it, over the past three decades, I’ve enjoyed imagining that I’m prepared for violence. I’ve handled it often. (Too often?) As a teen, I was an asthmatic, four-eyed bookworm who could barely clench a fist; I fantasized about getting violent revenge against bullies and muggers. Although I’ve handled switchblades, butterfly knives, brass knuckles, throwing stars, nunchaku, even a “Saturday night special” handgun, none of these truly fired my imagination. Since the Reagan administration, though, this slugger has figured prominently in my violent reveries.

“Slugger,” by the way, is a brand name. Generically, I’ve learned (by holding my nose and browsing sociopathic internet forums), a flattish leather blackjack like mine is known as a “slapper.” A rounded blackjack, on the other hand, is known as a “convoy.” (A “slapjack,” meanwhile, is a slapper with a spring handle, like a blackjack’s.) Although the convoy is preferred for knocking people out and breaking collarbones, when the occasion calls for numbing someone’s arm and rendering it useless — by cracking them smartly on the shoulder — a slapper is what you want.

I don’t want to kill anybody! I just want to use the Jay-Pee Slugger to slap a baddie decisively on the shoulder — or elbow, or kneecap, or perhaps across the neck or nose. One of these days. 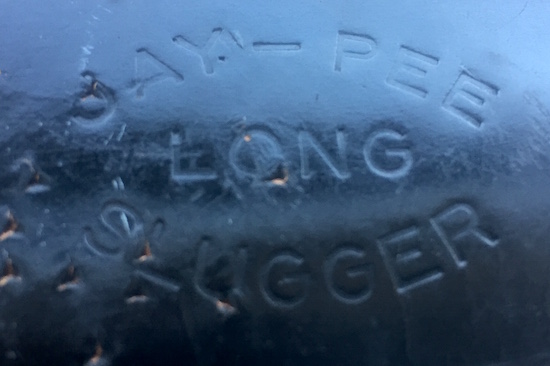