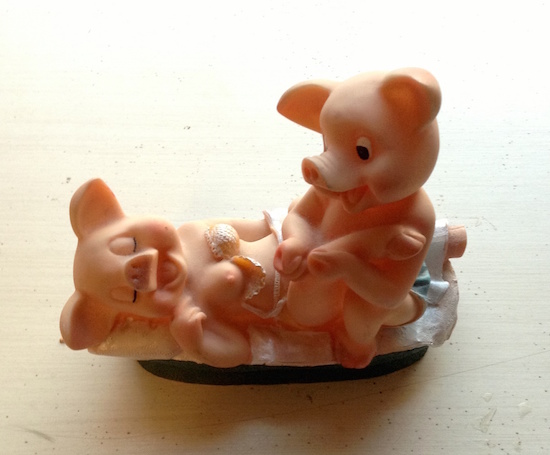 I acquired this statue of two pigs fucking in 2007 from a deli near the Fung Wah bus depot in New York’s Chinatown. I went in to get some snacks for my bus ride, and spotted this magnificent figurine of porcine ecstasy on a dusty shelf. As a lover of junk, I’ve seen many hideous figurines at yard sales and thrift stores in my day. But never had I gazed on something as terrifyingly unerotic as anthropomorphic pigs having sex. I had to have it.

The statue is about 8 inches wide, made of a sturdy, inflexible plastic. There is a male pig, sitting upright, presumably plowing (we can’t actually see penetration) into Mrs. Pig, who is lying on her back. Mrs. Pig — I assume they are married because I’m only comfortable with the idea of conventional marital pig sex — is glowing and smiling in ecstasy. Her lacy nightgown is pulled down off her pork shoulders, exposing her breasts, which are inexplicably human breasts.

My dear husband does not share my enthusiasm for ironically tacky knickknacks. He’s been generously tolerant of most of them, but the fucking pigs were just too much. I conceded the statue was too crude for the living room, so it stayed in our bedroom. For years, it migrated back and forth from one dresser top to another, to the windowsill, depending on what level of tidiness I was attempting.

“It’s funny!” I’d insist. “To who?” my husband would say. He had a point. When I bought it, I imagined showing it off to my friends, guests coming over and howling at this ridiculous item. Everyone would laugh and say, “Oh Katie, you’re hilarious! What a find!” But guests almost never went into our bedroom, so the piglust only ever had an audience of two.

During a recent Kon Mari sweep to make room for our new baby, I bid the pigs farewell. I put them on the sidewalk in a box with some other stuff, hoping someone might take it. An hour later, I decided that I couldn’t bear to give up the pigs. It was too late. When I checked the box, the fucking-pigs statue was the only thing someone had already taken. I hope it brings them much joy.

See All Posts by Katie Notopoulos