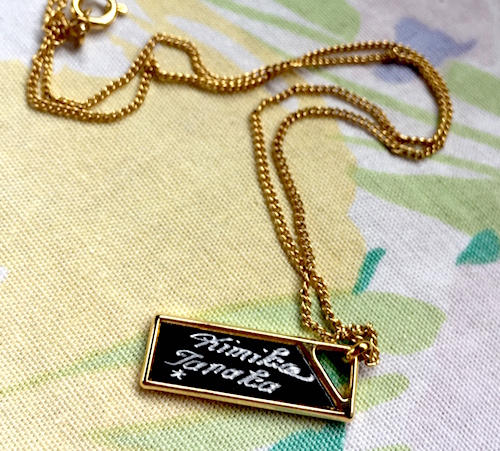 My grandfather Ogiichan was fond of going on trips. He went whenever he could with his friends and work colleagues, leaving my grandmother Obaachan behind to keep house. She didn’t mind him travelling so much, but she did ask him to not go away for two or more nights on the trot, because it meant she had to wash more than the average number of pants on his return. After one of his weekends away Obaachan complained — perhaps she was more tired that day than usual — that he never brought her home any gifts, like the neighbor’s husband always did when he travelled. Obaachan spoke up more than the usual Japanese wife of her day, reminding me a little of myself.

Upon hearing this Ogiichan sullenly took it to heart. The next vacation he went on was to the Tokyo Trade Expo ’85 and that’s where the necklace came from. He dutifully gave his wife her omiyage (gift): a golden black-lacquer pendant on a chain, engraved front and back in modish English script: Kimiko Tanaka / EXPO 85. 85.7.27 It’s very New Era — before the 1990 crash.

In the classic marital way of things never working out quite right, Obaachan accepted the gift but told him not to buy her any more presents because he should save the money for the children. She tucked the necklace away in a box in a drawer and forgot about it. Thirty years later I discover it whilst on the hunt for a safety-pin, and learned my grandparents’ story, which taught me so much about myself.

I live in London, my mother married an Englishman. I can barely speak Japanese and to me kanji is a foreign script. I love Obaachan dearly but I don’t understand her — and my life is so foreign in her eyes. Though there’s a gulf between us, Obaachan gave me the necklace and I’m wearing it now. We’re learning to understand one another.

In April and May 2017, we ran a Talisman Story Contest. The stories were judged by PROJECT:OBJECT’s Rob Walker and Josh Glenn, and by the legendary Annie Nocenti. Rimika’s OBAACHAN’S NECKLACE story was one of three runners-up.

See All Posts by Rimika Solloway

Rimika Solloway is a 28 year old living in London who has just moved back to Japan to spend six months with her 82 year old Obaachan. She's putting her life on hold for a moment to learn and appreciate where she came from, and to record her grandmother's stories.