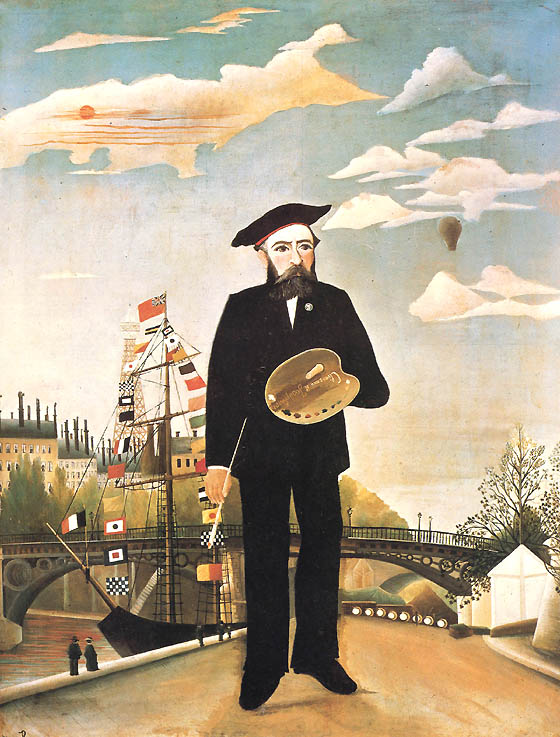 Sylvia Plath had HENRI ROUSSEAU (1844-1910) pegged: it was all about the color, and all about possession. The natural first reaction to Rousseau’s 1910 painting “The Dream” (his last painting, and his most famous) is, of course, to wonder just why there’s a naked woman on a red velvet couch in the middle of a jungle. Is it a joke? Surrealism? No, for the title of the painting explains it neatly: the woman is dreaming the jungle. We can go away, satisfied. But Plath saw the title as a sneaky fake, a sop to those “literalists” who require rational explanations, and in an ekphrastic sestina she wrote that Rousseau was simply

So possessed by the glowing red of the couch which you,

Yadwigha, pose on, that he put you on the couch
To feed his eye with red: such red! under the moon
In the midst of all that green and those great lilies!

Rousseau did not let himself fall into his flat, matte, perseverating world of nouns and leaves and bright colors until late in life. He held an ordinary day job as a mid-level border official until his late forties, and as such was half-mockingly and half-affectionately called “Le Douanier,” the customs officer, even after he retired to paint in earnest. And he was very earnest: Rousseau is the J. Alfred Prufrock of post-Impressionism, not Prince Hamlet nor meant to be, whose jungles grew in the city greenhouses and whose tigers lived in the city zoos. And although his paintings are always faintly ridiculous, that comes from us, not from them. Like toddlers, his paintings say “Mine! Mine!” and cannot be consoled or reasoned with, and we envy them their narrow clarity.

On his or her birthday, HiLobrow irregularly pays tribute to one of our high-, low-, no-, or hilobrow heroes. Also born this date: Fats Waller and Notorious B.I.G.

READ MORE about men and women born on the cusp between the Original Decadents (1834-43) and New Prometheans (1844-53) generations.