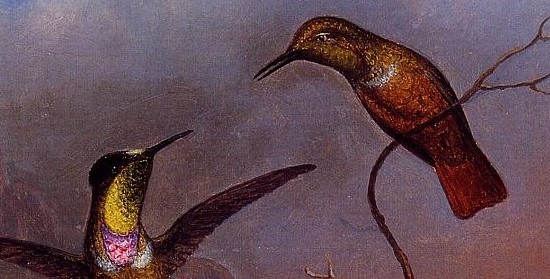 In the summer of 1864, novelist Harriet Beecher Stowe brought an injured hummingbird into her house. She fortified its spirits with sugar water, provided a little bed, and mandated convalescent naps; in a short time she had it perching at her side to take its meals from a tiny spoon. A male hummingbird with his hunger and his aggression is a comical image of human masculinity; with his injuries and his blood-red throat, this one may also have been a stand-in for Harriet’s son Fred, wounded grievously at Gettysburg the year before, a son of temperance activists who would seek solace in the bottle for the rest of his life, until he disappeared without a trace in far-off San Francisco.

To a teetotaler like Harriet, as author Christopher Benfey points out, “hum” could also mean “rum,” and a convalescent hummingbird could provide a small but vital buzz of compensatory energy for a mother who had lost a son to drink. The ambiguity of the hummingbird as a figure of abandon, as a kind of tiny avian Bacchus, is evident: despite their size, male hummingbirds are fiercely competitive, even violent. To the Aztecs, the hummingbird was Huitzilopochtli, the blood-drunk god of war, lord of creation and destruction. Emily Dickinson called the bird an “inebriate of air” and “debauchee of dew.” After the war, Stowe moved to the heart of the South, to Jacksonville, Florida — and as she and her contemporaries would discover, among the vines of Florida there was no shortage of hummingbirds.

American artists and writers recovered from the trauma of the Civil War by seeking signs of health, love, and vigor in the abundance of nature; from these signs they would learn the passion of progress and self-discovery. This is the saga that unfolds in Christopher Benfey’s A Summer of Hummingbirds, his fascinating, carefully wrought account of the lives of some of America’s most fascinating artists of the 1860s, ’70s, and ’80s. There’s Colonel Thomas Wentworth Higginson, the, self-besotted, idealistic man of letters who, despite his wounds, seemed “less a martyr than a martinet…float through the war”; Stowe, antebellum America’s most famous writer, painting flowers, nursing injured hummingbirds, and worrying about her wounded, wayward son; Harriet’s brother Henry Ward Beecher, a charismatic preacher whose sex scandals would shock the nation; the saturnine bachelor and itinerant painter of dreamlike, austere landscapes, Martin Johnson Heade; his student Mabel Loomis Todd, thrilling her Amherst neighbors with her painted dresses and bohemian airs; Mark Twain, the groundbreaking western voice who meshed uneasily with the New England elite. Above all there is Emily Dickinson — reticent and bold, prim and profound, an all-but-invisible presence with an unmistakable voice. On their own, each is fascinating. But Emerson had said, “I hate everything frugal and cowardly in friendship; in that at least we should be brave and generous”; and it’s in the wary dances and powerful orbits of their friendships that these truly star-struck, nature-addled romantics came into their own.

Their demimonde was no café-and-garret bohemia; it was en plein air, and ineluctably American. Benfey traces the charged connections and crossed paths in their frequent comings and goings from New York and New England to Florida and California, from the Americas to Europe, from the Northern to the Southern Hemisphere. Twain and Heade pass through Nicaragua within weeks of one another, each contemplating the same pyramidal mountain rising from a lake. Harriet Beecher Stowe writes a polemic essay against Byron’s sexual transgressions while her brother Henry tells his mistress that a love like theirs is the passion of higher natures, and Mabel Loomis Todd pursues an affair of her own with Emily Dickinson’s brother-in-law, playing Beethoven on the piano for Emily herself, who hides in the shadows of the next room. Throughout these liaisons and experiments, they were unflaggingly passionate and unfailingly proper, as sure of their potential as they were uncertain of their places in the world. Benfey reminds us that this America of passion, intrigue, and art was no backwater, either — that even by the middle of the 19th century, America’s cultural elites were objects of fascination abroad. Harriet Beecher Stowe’s writing inspired the very different novelist George Sand; Emperor Pedro II of Brazil (whose country would be the last in the West to outlaw slavery) paid a visit of homage to the abolitionist poet John Greenleaf Whittier. These were artists and thinkers intoxicated with fascination: enthusiastic for social causes, wondering of the planets and stars, besotted with the vagaries of insects and wild animals, in whose mute acts they discerned the roots of meaning: the spider and the bee, the butterfly and the bear, and especially the hummingbird — all of them existed in an increasingly divided-up and decimated nature to offer signs and lessons to their indulgent, enthusiastic auditors.

If Dickinson is Benfey’s still center of passion and integrity, it is Stowe even more than Twain who represents the artist as an actor playing with the flux of world events. With her pen, she accomplished what John Brown had tried and failed to do by the sword. Benfey portrays her both as a writer in control of her art and the center of a troubled, talented family. To a great extent, she imagined America — and human society in general — as an expansion of the problems of the domestic sphere; their world was a house out of order. And like other progressive New Englanders, she sought answers in nature with an animistic fervor at once prim and pagan.

Benfey’s account of their fascinations and discoveries buzzes and flits from one flower to the next, hummingbird-like; at the same time his tale is contrived like a flower, its loose, glittering petals arranged in circles around a darkening center. In his narrative, Stowe and her fellow New Englanders comprise a pious and merry coven, bundled and beset with contradictions, who threw off their ancestors’ cold Calvinism in favor of the redemptive power of nature. It was all earnest and intense, a heady play of signs and wonders. Emily Dickinson had appealed to Higginson for advice in letters of such dizzying intensity and concentrated energy that even the imperturbable Colonel was taken aback (“Mr. Higginson,” she began, “are you too deeply occupied to say if my Verse is alive?”) Her setbacks and subtle victories, won in the most radically solitary career in American letters, ultimately comprise the chief drama of the book; and when late in life she wins her way to love, its intensity and purity are almost medieval when set beside the worldly passions and enthusiasms of her sisters, cousins, and friends. These postbellum American artists awakened to the terror, the comedy, and the lush potency of a world that was not made for us — a world that would haunt the work of twentieth century artists like Joseph Cornell, whom Benfey makes the subject of a sensitive coda. Mark Twain sensed this world aborning; Martin Johnson Heade saw it, too, in the pure vegetal ambition of tropical flowers, the shimmering vistas of Florida, and the hungry whirr of hummingbirds.

A version of this essay appeared at the Barnes & Noble Review on May 05, 2008 in review of A Summer of Hummingbirds: Love, Art, and Scandal in the Intersecting Worlds of Emily Dickinson, Mark Twain, Harriet Beecher Stowe, and Martin Johnson Heade, by Christopher Benfey. It appears here as the first in a series revisiting Matthew Battles’ reviews for Barnes & Noble.