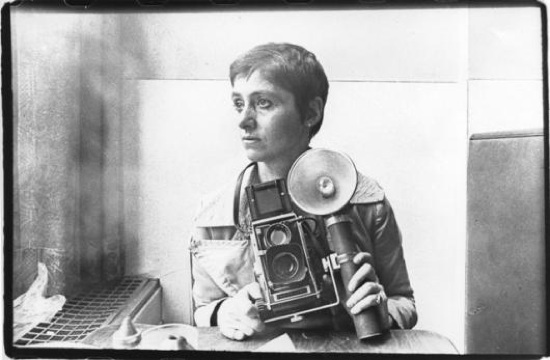 Photographer DIANE ARBUS (1923-71) grew up as the princess of a department store’s world of artifice, and spent the rest of her not very long life seeking its opposite. Arbus looked at the world and saw what was flawed, different, broken, ugly, pretended or attempted — all of which was for her, human and true. Her art fixes on the special realness of the surreal. In 1960, working on her first independent photo essay (for New Journalism-era Esquire), Arbus wrote to her brother, the poet Howard Nemerov, asking if he knew of any “impostors, or people with incredibly long beards, or ones who believe in the imminent end of the world, or are reincarnations or keep lions in their living room.” She became known as a photographer of freaks, to her consternation and chagrin; people were just missing the point. Arbus was obsessed with both the personal encounter with her subject as she was with the traces of that encounter. The crux of the matter was what she called the “gap between intention and effect,” between what a person thinks they are displaying and what the rest of the world sees. Arbus’s towering giants and cheerful trannies, her nudists and her weird children, may seem mild when compared with the work of photographers — think Nan Goldin or Larry Clark — who’ve followed her. But at her MOMA retrospective in 1972, every morning a janitor had to clean dried spittle off the glass covering her prints. That’s what happens when you show people what things really look like.

On his or her birthday, HiLobrow irregularly pays tribute to one of our high-, low-, no-, or hilobrow heroes. Also born this date: Maurice Merleau-Ponty.