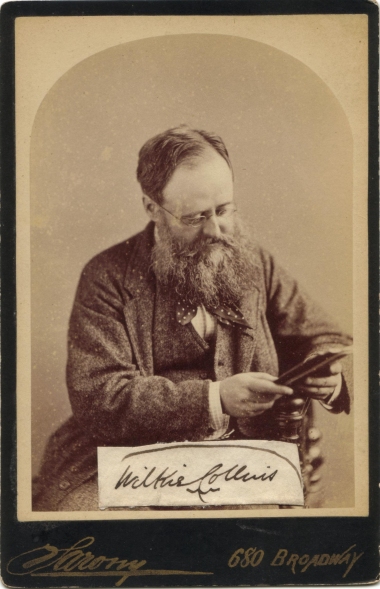 Some scholars claim that Poe invented the detective story, but my money’s on WILKIE COLLINS (1824–89), who wrote dozens of books and scores of stories and essays (many now hidden in the bound periodicals section of the library) to great acclaim. The wonderful, fat, twisty-turny thrillers we still read — The Moonstone (1868), The Woman in White (1860), and No Name (1862) — turn on the detection of clues and expose the truth in a shimmer of thievery, deceit, and undependable identities. Blame the latter on the sewing machine! In mid-Victorian cities, the advent of mass-manufactured clothing made it much more difficult to read a man’s social class: the same factory workers who cut the cloth for the middle-class’s garments also wore them. But you could still discern a man’s identity by his shoes — which were made by hand — and Collins’s attention to such detail is the engine of the detective novel. Like his friend and occasional publisher Charles Dickens, Collins took up social commentary in his writing: No Name exposes the unjust legal situation of children of unmarried parents, while the rigid skeleton of class supports the other novels. Collins died of a stroke no doubt related to his opiate addiction (he suffered from gout); he’d lived just long enough to see the 1887 publication of Arthur Conan Doyle’s A Study in Scarlet, which introduced the magnificent detail-detector Sherlock Holmes.

On his or her birthday, HiLobrow irregularly pays tribute to one of our high-, low-, no-, or hilobrow heroes. Also born this date: Paul Scheerbart, Gypsy Rose Lee, Elvis Presley, David Bowie.