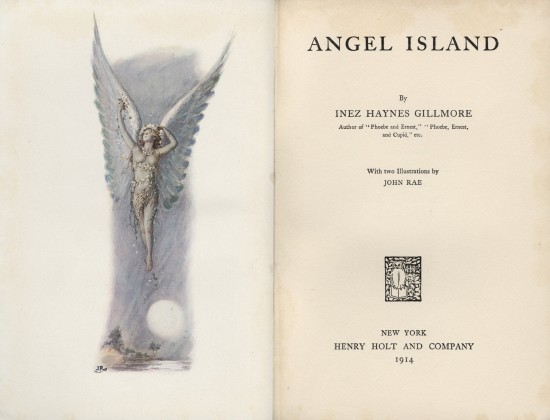 Shipwrecked on an uncharted island, five men encounter five winged women, rebels from their tribe who’ve decided to fly south instead of north. Frustrated by how aloof and skittish the women are, the men clip the women’s wings. At first, four of the five women enjoy the attention — all but one, their leader, Julia — and marry four of the men. However, the domesticated women soon realize that married life is a form of servitude, and they lament their lost freedom. When they bear children (mostly wingless boys) and discover that the one winged girl-child will also have her wings clipped, the domesticated women take a stand. They demand rights for women — after which things change on the island. The women’s wings are no longer clipped. Julia gets married: symbolically, her child is a winged boy.

Fun fact: Inez Haynes Irwin, who’d been active in the suffragist movement, was fiction editor of the left-wing periodical The Masses. She is best remembered as author of Maida’s Little Shop (1910), Maida’s Little House (1921), and other titles in a series about a rich girl who finds new purpose amidst misfit peers from a rough Boston neighborhood. In 1988, Angel Island in was republished as a classic of early feminist literature with an introductory essay by Ursula K. Le Guin.