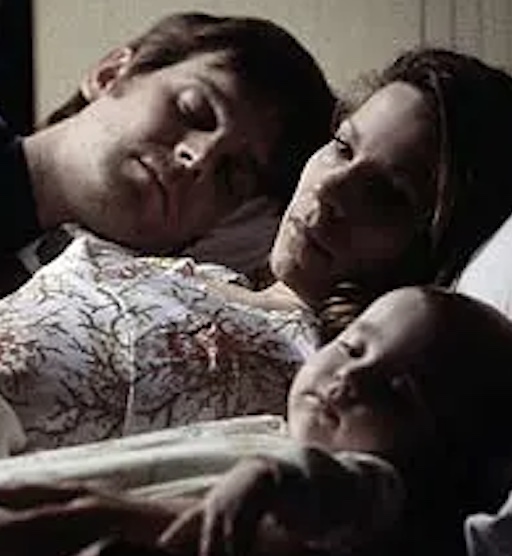 Lisa Kimmel Fisher had longed for Nate ever since they had been roommates in Seattle. Finally, her dream came true, she got to marry Nate and they had a child together. But as he pointed out, he couldn’t live up to her fantasy of him. Like everyone else, Lisa was under the illusion that once she had attained what she desired, lifelong happiness would be her reward. Unrequited love seeks a fix, but form doesn’t equal sense and the poem of marriage is unfixable.

Their relationship was supposed to be dysfunctional, problematic, but really it was ordinary. They fought, repeated themselves, were tender, compared themselves unfavorably to other people, were jealous, couldn’t agree, had sex or failed to, took care of their child, and said “I love you” to each other.

Viewers considered Lisa a vicious hippie. She emanated a neurotic, manipulative, controlling forcefield that enveloped those who came within its scope. She was exacting in inexact ways, and it was easy to cross her moral lines without knowing it. For example, Nate dared take their baby to the funeral of the father of an ex. How could he not realize what a betrayal it was, to show their baby to her? She asks, outraged, “Did you let her hold the baby?” Her desperation is familiar. Each person has their book of rules, of commandments. They get made up on the spot, sometimes, as an alibi for hysteria.

Lisa leaves the marriage and the child, without intending to. That is, she goes on a trip and never comes back. When Lisa’s return is delayed, we wait and worry, with Nate, for her call. As we wait, something uncanny (the valence of Lili Taylor) is coming into view. Her disappearance might have been caused by Nate’s ambivalence about her, or ours. But no, it seems she has been having an affair with her brother-in-law. When she tries to end things, he murders her. The manner of her death, though tragically realistic, comes a shock. Now we see how her compulsive need to concoct betrayals is a deflection, a cover. Because stories are interpretations, the future gives rise to the past. The forking path leads backwards.

Even Lili Taylor didn’t know the fate of her character. When Taylor acted Lisa’s departure, she assumed she would return. She said she would have performed differently had she known. Like Lisa Kimmel Fisher, that alternate performance also went missing; what would it have changed? It is the element of reality in the fiction, the place in the psyche where the actress, the character, and the rest of us merge: believing the story will continue.